Nation hunkers down for big storm

Nation hunkers down for big storm 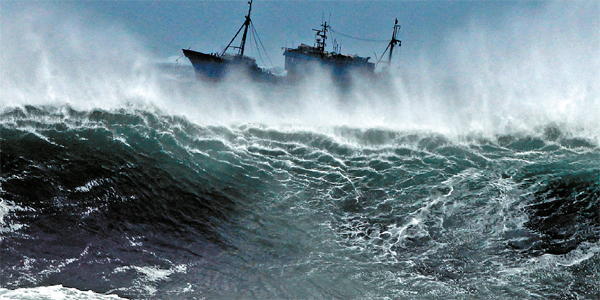 A fishing vessel navigates high seas yesterday caused by Typhoon Bolaven in waters off Seogwipo, Jeju Island. The Korea Meteorological Administration issued typhoon warnings across the country’s southern regions yesterday, including Busan and Jeju Island, as Bolaven was projected to make its way upward along the west coast today. [YONHAP]


Authorities were bracing yesterday for what may be the most powerful typhoon to hit the Korean Peninsula in a decade.

Typhoon Bolaven, named after a highland region in Laos, is thought to possibly match or exceed the destructive force of Typhoon Rusa that battered the country in 2002, killing more than 200 at the time.

According to the Korea Meteorological Administration, Bolaven was measured to have winds up to 173 kilometers per hour (107 miles per hour) at 9:00 a.m. yesterday, when it was 250 kilometers northwest of Japan’s Okinawa.

“At least more than 50 millimeters [two inches] of precipitation in the central regions is expected today, with some central areas forecast to be soaked by up to 150 millimeters of rain,” said the agency.

“Jeju Island, the southern coast and areas near Mount Jiri are also to be hit with up to 300 millimeters of rain between yesterday and today.”

The eye of the typhoon is anticipated to be passing 90 kilometers west of Mokpo, South Jeolla, at 9:00 a.m. today and be on course to come closer to the peninsula along the west coast. The storm should reach Seoul around 3 p.m. today.

The maximum wind speed the 15th typhoon of the season will bring near the capital is expected to reach 155 kilometers per hour at 3:00 p.m. today, when the eye of the storm passes 190 kilometers southwest of Seoul. Typhoon Bolaven is the second typhoon to make landfall this year.

Bolaven should reach North Korea later in the day, passing 100 kilometers east of Shinuiju in North Pyongan Province with winds at up to 130 kilometers an hour, making predictions for possible damage in the North.

Government authorities in the South, especially in the southern regions, addressed emergency measures yesterday to minimize the damages such as running inspections of areas deemed prone to landslides and urging residents in areas predicted to be directly affected to evacuate before the coming of the typhoon.

The Seoul city government closed all entrances to the Han River parks as of last night until the storm passes.

The national weather agency issued warnings for many regions in the southern part of the country, including Busan and Jeju Island, yesterday.