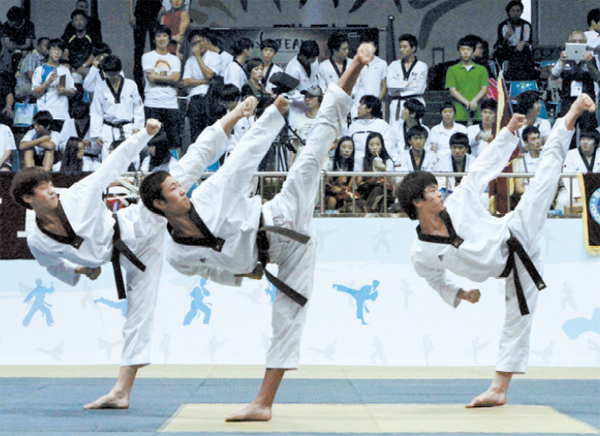 A Taekwondo demonstration team stages an exhibition performance during the opening ceremony of the Taekwondo Hanmadang, an annual gathering of Taekwondo practitioners from across the world, at the Kukkiwon, also known as the World Taekwondo Headquarters, in Yeoksam-dong, southern Seoul, yesterday. Around 3,000 practitioners from 43 countries have been attending the event, during which they will compete for medals in 40 categories from nine disciplines including breaking, self-defense and training routines called poomsae. The event, which marks its 20th anniversary this year, will run through Friday. The World Taekwondo Federation sponsors it along with the Korea Taekwondo Association, the Taekwondo Promotion Foundation, the Ministry of Culture, Sports and Tourism and the Korea Tourism Organization. [YONHAP]