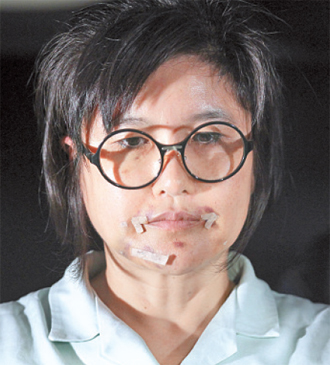 Yang Gyeong-suk was arrested on charges of receiving bribes yesterday. The bandages around her mouth are from having moles removed. [NEWSIS]

The prosecution expanded its money-for-nomination investigation to the floor leader of the largest opposition party after obtaining testimony that the veteran member of the Democratic United Party had met with aspiring lawmakers on the eve of the April legislative elections.

The Supreme Prosecutors’ Office launched a probe into the allegations that the owner of a liberal Internet broadcasting company had received 4 billion won ($3.52 million) from three aspiring politicians in return for using her connection with the DUP to win nominations for the April 11 legislative elections.

The prosecution also confirmed that Representative Park Jie-won, the DUP floor leader, met with her and the nomination-seekers after they paid her.

None of them won DUP nominations, however.

The prosecution detained Yang Gyeong-suk, the senior executive of Radio 21, Monday on charges of receiving 4 billion won from the three aspiring lawmakers. The alleged bribe-givers were also detained yesterday.

“The prosecution presented prima facie evidence to substantiate the large financial transactions between them for the nomination,” Judge Lee Jeong-seok of the Seoul Central District Court said as he issued warrants. “There is a risk of evidence destruction.”

The prosecution also obtained testimony that DUP floor leader Park met with all four of them at a hotel in downtown Seoul in March. Although no discussion about the nominations was made during the meeting, the alleged money-givers believed they would earn nominations because of Park’s presence, the prosecution said.

Park also admitted that he had met them at the introduction of Yang. “We didn’t talk about nominations at all,” Park said. “And I only found out a few days later that they each donated 5 million won to me.”

Yang was already questioned by the prosecution on Friday but denied the allegations. She claimed that the three men provided a total of 4 billion won to her as legitimate investment deals. She also said there were investment contracts, but the prosecution believes that the documents were created to hide the real purposes of the deals.

Yang joined KBS in 1985 and worked as a voice actress and a producer. She entered politics in 2001 as an aide to Hahn Hwa-kap, then chairman of the Democratic Party, the predecessor of the Democratic United Party.

During the presidential election in 2002, she founded Roh Moo-hyun Radio with some Roh loyalists.

Rhyu Si-min, who later became the health minister in the Roh administration, and Moon Sung-keun, an actor-turned-politician and a senior leader of the DUP, were part of the radio station.

Shortly before the April 11 legislative elections, Yang also served as an executive of a civic group initiated by Moon.

The DUP tried to distance itself from the scandal.

In a statement issued Monday, the party said the prosecution’s probe will determine the veracity of her argument, but it has nothing to do with the accused nomination bribery.

The ruling Saenuri Party didn’t miss the opportunity to attack the DUP and its floor leader.

“There were speculations that the DUP presidential front-runner Moon Jae-in, Chairman Lee Hae-chan and floor leader Park had a backdoor dealing to divide the power at the time,” Suh said.

“Now an arrest was made for the bribe-receiver, and Park’s name once again popped up.”