Park tries to reach out to liberals to no avail

Park tries to reach out to liberals to no avail 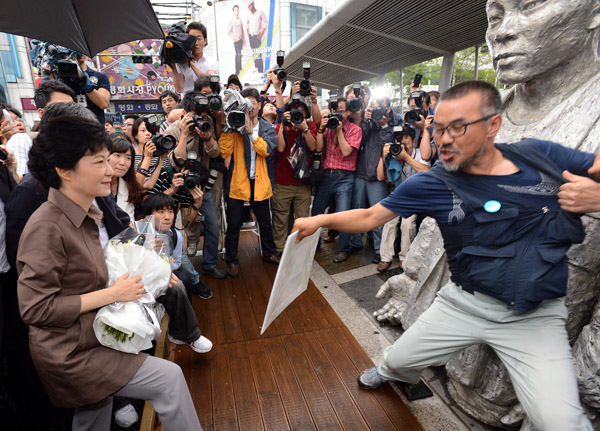 As Park Geun-hye, left, presidential candidate for the ruling Saenuri Party, is about to lay flowers in front of Chun Tae-il’s statue on a bridge over the Cheonggye Stream in Seoul yesterday, Kim Jung-woo, right, a leader of the Ssangyong Motor labor union, tries to stop her. [NEWSIS]


The national unity campaign of the Saenuri Party’s presidential candidate Park Geun-hye faced its first obstacle yesterday as her plan to visit the memorial foundation of late labor activist Chun Tae-il was rejected by his family.

Park arrived at the Chun Tae-il Foundation in Jongno, central Seoul, yesterday morning, but an alley leading to the foundation’s building was blocked by about 60 people from civic groups and the Ssangyong Motor labor union.

After a brief telephone conversation with Park Gye-hyeon, the foundation’s secretary general, Park gave up her planned visit.

Earlier in the morning, the family of Chun issued a statement and made clear she was not welcomed.

“It is such a unilateral move and we are not ready to receive her,” they said in the statement.

Chun is an icon of Korea’s labor rights movement.

In 1970, while he was working at a sawmill, he committed suicide by self-immolation at the age of 22 in protest of poor working conditions.

His death sparked the labor movement in Korea.

The workers’ rights movement naturally was also associated with the protests against the authoritarian rule of Park Chung Hee, who was president at the time and father of Park Geun-hye.

Park’s decision to visit the Chun Tae-il Foundation was seen as the latest move in a series of efforts to make peace with the liberals to seek national unity.

She has paid visits to the graves of liberal Presidents Kim Dae-jung and Roh Moo-hyun and met with their widows after she was elected as the Saenuri Party’s presidential candidate.

“Chun is a symbol of the darkness of the industrialization under the Park Chung Hee regime. She would pay tribute to the late activist and show her strong will of economic democratization to resolve the problems associated with irregular workers.”

Despite her intentions, her plan to visit the foundation floundered as Chun’s family strongly protested her visit.

Chun Tae-sam, a younger brother of the late activist, urged Park to pay attention to the Ssangyong Motor labor union issue before visiting the foundation.

“What’s more important for this country is to visit the mourning altar of 22 dead Ssangyong Motor unionists at the Daehan Gate [of Deoksu Palace] to make the people understand the issue,” Chun said.

In 2009, unionized workers of Ssangyong Motor occupied a factory in Pyeongtaek, Gyeonggi, for 77 days in protest of a massive layoff.

During the occupation, the police and the protesters engaged in violent standoffs, and dozens of the protesters were prosecuted after the strike ended.

Following the incident, 22 workers of the automaker died, many of them in suicides, as the company did not reinstate them.

Unionists of Ssangyong Motor recently staged rallies in front of the Saenuri Party’s headquarters, urging the ruling party to resolve their issues.

Representative Chun Soon-ok, Chun’s younger sister and a proportional lawmaker of the Democratic United Party, also issued a statement yesterday after Park announced her visit to the foundation.

“I cannot hide my gloomy feeling,” she said.

“Park’s intentions must have been good, but this country’s working conditions are so bad that there won’t be an easy fix. Improving the current labor problems should be her priority.”

She also said without Park’s genuine reflection on the past starting from her father’s military coup and dictatorial rule, her words and actions are destined to be doubted.

After her visit to the foundation was blocked, Park moved to the Chun Tae-il Bridge over the Cheonggye Stream.

The place is a symbolic spot for liberals.

Chun’s mother’s funeral parade took place on the bridge one year ago.

Park also tried to lay flowers in front of Chun’s statue, but protesters blocked her. Calling her “a dictator’s daughter,” a protester also shouted “Shame on you!” and “How dare you come here?”

Kim Jun-yong, a member of the Korean Confederation of Trade Unions and a friend of Chun’s who participated in the labor movement in the 1970s, was also grabbed by his collar by another protester.

As her plan for “grand national unity” derailed yesterday, speculation grew in the political arena that she will have to issue an apology to the victims of the political, economic and social persecution during her father’s rule.

In a radio interview on Monday, Lee Sang-don, a political science professor at Chung-Ang University and a member of the Park campaign’s political reform special committee, also urged her to meet with the families of the victims in the People’s Revolutionary Party incidents.