Pair of provocateurs from Japan are named

Pair of provocateurs from Japan are named 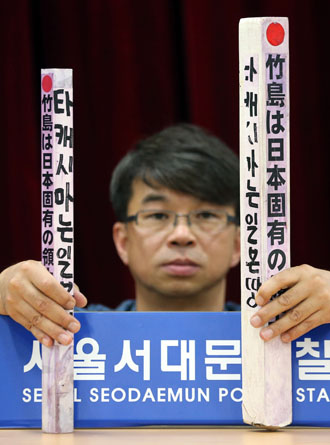 Seoul Police released the identities of the Japanese men who put up signs with anti-Korean messages regarding Dokdo and women forced to be sex slaves for Japanese soldiers during World War II.

They worked as a team but carefully traveled separately and stayed at different hotels to avoid being spotted.

The Seoul Seodaemun Police Precinct yesterday said the suspects were two Japanese nationals, 60-year-old Muraka Haruki and 38-year-old Sakurai Tetsuro. The relationship between them and where they live in Japan wasn’t known yet.

They stayed at different hotels in central Seoul, police said, and left them at around 5 a.m. on Aug 22. They met in front of the Dokdo Research Institute in Migeun-dong, Seodaemun District, western Seoul.

There, they erected two white-painted wooden stakes with characters in Korean reading “Takeshima (referring to Dokdo in Japanese) is Japan’s territory.”

After that, they moved onto the headquarters of the Korean Council for the Women Drafted for Military Sexual Slavery by Japan in Seongsan-dong, Mapo District, western Seoul, taking different modes of transportation.

They erected a poster with a message in Korean, Japanese and English. In English, the message read, “Comfort Women = Sexual Slave IS LIE!” They also erected another wooden stake on the wall of the council.

A CCTV camera caught the pair at the Dokdo Research Institute at 6:20 a.m.

Police said they couldn’t confirm whether the pair did any other mischief.

Korean immigration records say that Muraka has visited Korea five times since 1995 for the purpose of tourism and Sakurai has never visited Korea before.

“So far, the Dokdo Institute has expressed their intention to file a complaint,” a police official said. “If they submit a complaint against them, we will instantly launch a probe, informing the immigration office of their crimes.”

Police said that they will figure out whether the two men has anything to do with Suzuki Nobuyuki, 47-year-old Japanese activist who uploaded a video on YouTube planting a waist-high wooden stake in front of the memorial to the sex slaves built outside the Japanese Embassy in Seoul.