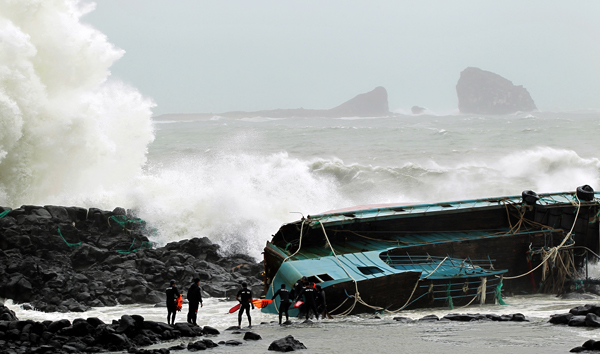 South Korean Coast Guard officers attempt to rescue Chinese fishermen from a Chinese ship after it was dashed on the rocks in Jeju yesterday. [NEWSIS]


JEJU - Two Chinese fishing boats that were illegally fishing with 33 sailors onboard were dashed on the rocks due to Typhoon Bolaven in waters off Seogwipo, Jeju Island, yesterday.

The Jeju Coast Guard who rescued the Chinese sailors said their illegal fishing in Korean territory is subject to punishment, but they are not considering taking punitive action as the sailors barely survived the incident.

The Coast Guard said two 120-ton Chinese fishing boats, identified as No. 91104 and 91105 from Shandong, China, were battered by strong winds and high seas.

The fishing boats were hit by high seas around 2:40 a.m. yesterday in waters 1.8 kilometers (1.1 miles) southeast of Hwasun port, Seogwipo. Both boats went aground, with one of them breaking into two pieces.

Five Chinese sailors out of the 33 were killed and 10 of them were missing at press time yesterday, but the remaining 18 were rescued by the Jeju Coast Guard, who battled wind at 180 kilometers per hour (111 miles per hour) and eight-meter (26-feet) high waves.

The rescued Chinese are receiving treatment at the Cheju Halla General Hospital in Jeju City, according to the coast guard. Seventeen fishermen were on board on the 91104 boat and the other 16 were on the other boat.

The Coast Guard said they dispatched 60 rescuers to the stuck boat after identifying some survivors at the boat around 8:30 a.m. yesterday, but experienced trouble running a rescue operation due to the bad weather condition.

After battling the typhoon, two rescue team members eventually boarded the damaged boat at 9:45 a.m. and began the rescue operation at 10 a.m. The rescue team on the boat and on the ground near Hwasun port used ropes to rescue all the fishermen on that boat by 10:45 a.m.

“It really was tough conditions to run a rescue operation,” said Kang Doo-cheol, the rescue team leader of the Jeju Coast Guard. “But we judge that it would risk the Chinese sailors’ lives if we waste more time. We tried to save them with the mindset that they were members of our own families.”

The Coast Guard said they first sent radio messages to the boats that were anchored 1.8 kilometers away from Hwasun port to evacuate due to the typhoon on Monday evening, but the Chinese never responded. It judges that they didn’t respond to the radio messages because they were afraid of being arrested.

As the Chinese did not answer to the radio messages, the Coast Guard called the Chinese consulate and asked them to attempt communication, but the Chinese fishermen didn’t answer the call either.

“The two boats were tied to each other with ropes in preparation for the typhoon,” a spokesman of the Coast Guard told reporters. “But the accident occurred as the ropes were cut by strong wind and waves.”

The Coast Guard said the rescued Chinese sailors testified that they were fishing in North Korean territory, but they will run a probe to find out how they are related to the North and also will ask why the sailors didn’t respond to the radio messages sent from the Coast Guard.

“They are highly expected to be kicked out of the country after the accident is dealt with,” said Kang Doo-cheol, the rescue team leader.