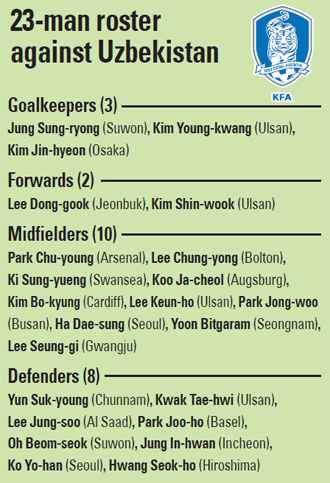 Park Chu-young of Arsenal and Lee Chung-yong of Bolton will return to national football team action next month as the Taegeuk Warriors seek to maintain their first-place standing in Group A of the 2014 FIFA World Cup qualifiers.

Choi Kang-hee, the national football team coach, announced yesterday his 23-man roster for Korea’s next qualifier against Uzbekistan. The coach said he has put together the strongest team yet in its bid for a ticket to Rio de Janeiro.

Ki Sung-yueng of Swansea City and many other young guns coming off the Olympic campaign are also included on the roster along with K-League veterans like striker Lee Dong-gook.

“I picked the best players we’ve got to pass through the most crucial moment in the final preliminaries,” Choi told reporters at the Korea Football Association in Seoul yesterday, referring to the match set for Sept. 11 in Uzbekistan.

With two victories - a 3-0 win against Lebanon on June 12 and a 4-1 rout against Qatar on June 8 - Korea sits atop Group A in the fourth and final round of the qualifications. After the match versus Uzbekistan, Korea will face Iran, currently runners-up of the group with one victory and one draw.

Park, 27, had been absent from Korea’s World Cup campaign since the Feb. 29 match against Kuwait, the country’s final match of the third preliminary round. The growing controversy surrounding allegations of military dodging and his scant play at Arsenal had kept him from being called up by Choi in Korea’s two previous matches against Qatar and Lebanon.

He earned legal exemption from compulsory 21-month-long military service after his crucial play contributed to the Hong Myung-bo squad earning a bronze medal at the London Olympics early this month.

Yet the outing has not silenced his most vocal critics, who question the versatile player’s willingness to play for the Choi squad.

Military exemption for performing well at the FIFA World Cup is no longer available under the new military law, revised in 2008. Park is also in a desperate hunt for a new team as Arsenal has said the Korean will not see time on the pitch. 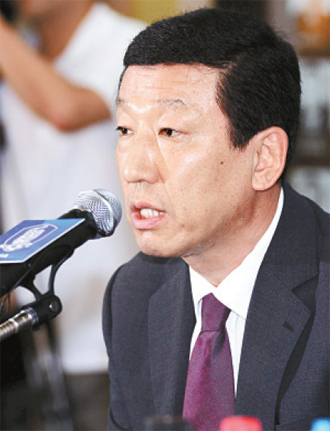 Coach Choi said a transfer is Park’s concern, not the country’s, and he will require both pride and sacrifice as a national representative from Park as he would do from the other national team players. “I believe Park Chu-young will be able to adapt well,” he said.

A choice to further sharpen the offensive edge of his team is Lee Chung-yong. The 24-year-old right winger has missed international competition since the tune-up match against Ghana on June 7 of last year because of an injury to his right shin sustained in July 2011. Choi said Lee’s intelligence and ability will make him a good fit for the national team despite his long-time absence.

“He is steadily playing for the club, so I don’t think he has a problem with his playing or physical ability,” Choi said.

Ki, who recently became the 10th Korean to play in the English Premier League with his transfer to Swansea City, again made the national team. The 23-year-old midfielder, whom the Wales club paid a record high fee to bring in from Celtic, debuted for Swansea on Tuesday and played 76 minutes in the team’s Cup game victory against Barnsley, 3-1.

Ki will be reunited with Park and six other members of the U-23 squad, including Park Jong-woo, a midfielder withheld from receiving a bronze medal for his holding up a banner after the bronze-medal match against Japan that read “Dokdo is our land,” referring to the Korea’s easternmost islets claimed by Japan.

Choi said he talked with Olympic coach Hong and decided they are ready for the national team.