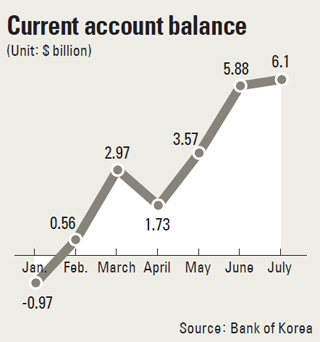 The current account surplus hit a new record high last month as imports fell at a steeper pace than exports, indicating that the Korean economy has yet to bounce back from the deepening deceleration in global markets.

It has remained in the black for the last six months.

Until early this year, there were positive signs indicating that the domestic economy would continue along a solid growth path, with the government and central bank projecting economic growth for the year of nearly 4 percent.

However, Korea’s prospects have gradually dimmed as the fiscal crisis in the euro zone drags on and even emerging markets like China and Brazil have started to report disappointing growth patterns.

This led Seoul to lower its annual growth target to 3.3 percent, a goal that now seems optimistic

Minister of Strategy and Finance Bahk Jae-wan recently hinted that if the global economic continues limping along at its current pace, the domestic economy could see growth slow this year to below 3 percent.

The current account surplus hit $6.1 billion in July, according to the Bank of Korea, climbing from the previous record of $5.9 billion one month earlier.

Even the goods balance logged a surplus of $5.32 billion last month, up from a revised $5.05 billion in June and the best result in 21 months. However, the rise was not prompted by stable export growth; on the contrary, overseas shipments shrank 4.1 percent on-year to $46.58 billion, but imports decelerated faster, losing 5.8 percent to stand at $41.27 billion.

Amid such conditions, the central bank continues to deny that the account surplus is recessionary.

“In August, the size of the surplus is expected to be smaller than that of July due to the effect of people taking their summer vacations, but it will not likely fall into negative territory,” said Yang Jae-ryong, director of the BOK’s monetary and financial statistics division.

The BOK downplayed concerns about the drop in trade, arguing that the volume of exports and imports both rose last month, and that it was the lower prices triggered by falling oil costs that had skewed the numbers.

“The value of exports and imports fell, mainly driven by falling prices. Another factor was the impact last year of the earthquake and tsunami in Japan, which gave overseas shipments a boost and created an unusual basis for comparison,” Yang noted.

The central bank said the full-year surplus may surpass its original estimate of $20 billion if there are no more external shocks.

Market watchers said the BOK’s view is too upbeat, however, given that sharp drops in imports equate to sputtering domestic demand, sapping economic growth.

“The BOK’s perception is too optimistic. The surplus hit a record high, but the quality of the surplus was not strong,” said Jun Min-kyu, an economist at Korea Investment & Securities.

The surplus may also put upward pressure on the local currency, which has appreciated 1.3 percent to the dollar this year. A stronger won is feared to crimp already-weak exports, which account for about 50 percent of the economy, according to analysts.

However, major economies’ appetites for Korean goods rose fractionally. Exports to the U.S. inched up 0.4 percent on-year in July, while those to the EU fell at a slower rate.