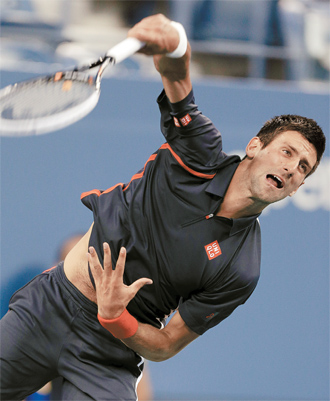 Novak Djokovic, of Serbia, serves to Paolo Lorenzi, of Italy, during a match at the U.S. Open tennis tournament, Tuesday in New York. Djokovic beat the 69th-ranked Italian 6-1, 6-0, 6-1.[AP/YONHAP]

NEW YORK - Leave it to Serena Williams to come up with a creative way to judge just how much the air was whipping around at the U.S. Open on Tuesday night.

That it was. It just didn’t bother Williams too much in a 6-1, 6-1 victory over 75th-ranked CoCo Vandeweghe of the U.S. in the first round at Flushing Meadows.

Coming off titles at Wimbledon and the London Olympics, Williams looked sharp against Vandeweghe, committing only nine unforced errors despite the tricky conditions.

“I didn’t hit anything too hard, because the ball - I wouldn’t have known where it was going to go,’’ Williams said.

In search of her 15th Grand Slam title, Williams improved to 48-1 in first-round matches at major tournaments. The only loss was at this year’s French Open.

During her on-court interview after Tuesday’s match, she gave a shout-out to another Olympic gold medalist, New York Knicks star Carmelo Anthony, who was in the stands cheering for Williams.

Vandeweghe, who fell 7-5, 6-3 to Williams in the Bank of the West Classic final earlier this summer, had trouble dealing with her toss in the blustery wind. She finished with six double-faults and only held serve once in seven tries.

Novak Djokovic lost the opening game of his title defense at Flushing Meadows, and then reeled off 18 of the next 19 games, completely controlling every aspect of a 6-1, 6-0, 6-1 victory over 69th-ranked Paolo Lorenzi of Italy.

All told, Djokovic put in 73 minutes of work under the lights at Arthur Ashe Stadium. If it could really be called work at all.

Of course, that was one of his objectives. Saving energy is key, because Djokovic wants to win seven consecutive matches over these two weeks so he can leave town with the sixth Grand Slam championship of his career.

“It’s also important for me to try to be as economical with the time I spend on the court as possible, but obviously not underestimating any opponent,’’ the Serb said. “I played really focused, tried to get to the net, also. It was great, all in all.’’

The second-seeded Djokovic won 79 of 114 points, hit seven aces and finished with a 32-10 edge in winners.

Andy Roddick’s 30th birthday approaches on Thursday, even as his body has succumbed to injury after injury, his serve is pretty much still the same as it ever was. Now that he more frequently faces opponents who grew up cheering for him - such as 21-year-old qualifier Rhyne Williams of Knoxville, Tenn., the foil for Tuesday’s 6-3, 6-4, 6-4 victory - Roddick knows more than ever he needs to rely on the best thing he’s got, and 20 aces helped this time.

Following Roddick into Arthur Ashe Stadium was 32-year-old Venus Williams, playing her first U.S. Open match since she pulled out before the second round in 2011 and revealed she had been diagnosed with an autoimmune disease.

After a shaky start, Williams used her own powerful serve to right herself and beat Bethanie Mattek-Sands.