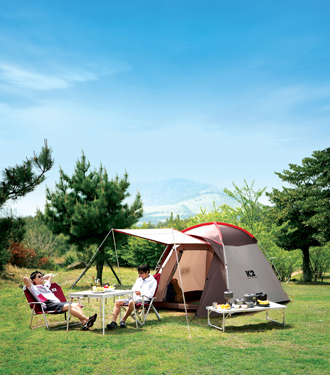 Despite the economic downturn, imports of leisure products including tents have risen by about 30 percent this year as of July, owing to a nascent camping boom in the country, government statistics showed this week.

According to Korea Customs Service on Monday, the country imported $279.39 million worth of leisure products from January through July, up 19.7 percent from $233.36 million a year earlier.

The statistics showed that imports of camping equipment, including tents and sleeping bags, surged 27.8 percent on-year to $56.36 million, leading the increase.

Imports of summer-related products such as swim suits rose 18.3 percent to $176.46 million, while fishing rods and other aquatic-sports equipment grew 16.3 percent to $46.56 million, owing to the bubbling popularity of water sports such as scuba diving, the data showed.

Most of the imported leisure products came from China.

Korea bought more than 70 percent of its camping equipment from the country due to its cheaper prices, the statistics office said.

Imports of leisure products have been rising steadily for years due to increased interest in outdoor activities.

Last year’s import of leisure products was an all-time record.

“Influenced by reality TV shows like ‘One Night and Two Days,’ outdoor camping has become a major leisure event for Koreans,” said an official at Korea Customs Service.

“The majority of imported leisure products came from China, because of its cheap prices, which is an important factor during an economic downturn,” he added.

If the trend continues, imports of leisure products are likely to hit a record high this year, surpassing the previous record, the official forecast.