Lawmakers’ average worth drops to 1.83B won

Lawmakers’ average worth drops to 1.83B won 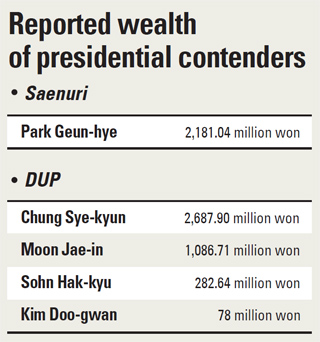 The average wealth of Korean lawmakers elected to parliament this year is 1.83 billion won ($1.61 million), down 410 million won from 2011, a report showed yesterday.

The findings by the National Assembly’s ethics committee cover data from 299 of the 300 legislators elected on April 11, but excludes four lawmakers, whose wealth exceeds 50 billion won, from the average. Those four, such as Rep. Chung Mong-joon, own or have large stakes in big businesses.

The total represents a drop from an average of 2.24 billion won tallied for 293 lawmakers in office last year.

The total includes her 1.94 billion won home in southern Seoul, and two real estate holdings in Daegu, which was her constituency prior to the latest election when she switched to a proportional representative seat. The five-term lawmaker also has 78 million won in savings.

Among opposition party contenders for the country’s top elected post, former commerce minister Chung Sye-kyun said he was worth 1.69 billion won thanks to ownership of an apartment in Seoul and 370 million won worth of savings and stock holdings owned by himself and his immediate family.

Rep. Moon Jae-in, a former chief of staff to the late President Roh Moo-hyun and the current front-runner in the DUP’s primary, said his wealth reached 1.08 billion won and includes his home in Yangsan, South Gyeongsang, 420 kilometers (261 miles) southeast of Seoul, and minor property holdings on Jeju Island as well as 398 million won in savings.

Former DUP chairman Sohn Hak-kyu, who did not run for a parliamentary seat in April, reported a net wealth worth of around 282 million won as of February. He owned real estate and savings worth a little over 760 million won and 140 million won, each, but had debts reaching 625 million won.

Kim Doo-kwan, the former South Gyeongsang Province governor and another contender for the DUP presidential candidacy, said his wealth stood at just 78 million won in March when he was still in office.

The candidate, who quit his governor’s post to run in the party’s primary, said his wealth contracted by 40 million won from the year before mainly due to education outlays for his children and living expenses.

The ethics committee said roughly 20 percent of all lawmakers had real estate holdings exceeding 2 billion won, with eight of the 10 richest legislators belonging to the Saenuri Party. The remaining two are Rep. Hyun Young-hee, who was expelled from Saenuri for her alleged involvement in a money-for-nomination scandal, and Rep. Sung Woan-jong of the minor conservative Advancement and Unification Party.