Nomination probe of DUP gets closer to Park

Nomination probe of DUP gets closer to Park 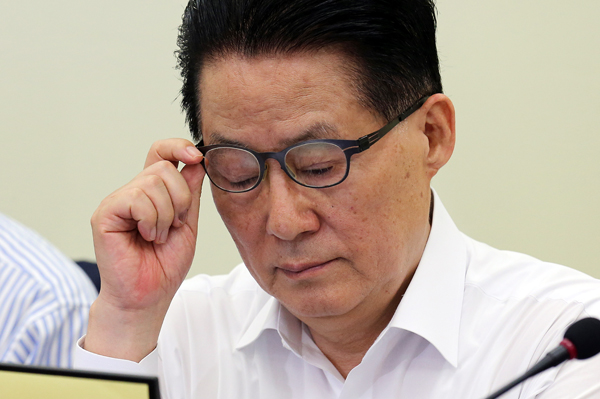 
The prosecution’s investigation into the money-for-nominations scandal of the Democratic United Party moved closer to the party’s floor leader as text messages exchanged between Representative Park Jie-won and the alleged broker as well as aspiring lawmakers were revealed.

The three men who allegedly paid her to win DUP nominations in the April legislative elections were also detained. None of them, however, won candidacies.

Sources at the Supreme Prosecutors’ Office said Park had exchanged up to 4,000 text messages and phone calls with Yang this year. They said the exchanges increased before the election and trailed off afterward.

Jeong was accused of paying 1.2 billion won to Yang. The prosecution said a text message from Park was found in his cell phone.

He sent a message to Park on March 19, on the eve of the DUP’s announcement of the proportional representative candidates, saying, “I hope to hear good news,” a source told the JoongAng Ilbo. Park replied: “I am sorry that I cannot send you good news,” the source said.

The text messages fueled suspicions that the DUP floor leader was more deeply involved in the scandal than thought earlier. Park had admitted having met Yang and the three nomination seekers and receiving small political donations from them, but denied any involvement in the money-for-nomination scandal.

The DUP yesterday demanded the prosecution stop what it sees as an unfair political probe. Representative Woo Won-shik, a DUP spokesman, said the prosecution targeted the largest opposition party and its floor leader in the sensitive months leading up to the presidential election.

Woo said the prosecutors were unfairly highlighting the probe in an attempt to drive public attention from the Saenuri Party’s money-for-nomination scandal.

Woo also criticized the prosecutors for leaking details of the case to the media and said the party is considering legal action against the prosecution.

Through the DUP spokesman, Park also said he was a victim of identity theft because his name was illicitly used to send messages to Lee Yang-ho to discuss the nominations. Park was actually on an airplane when the messages were sent to Lee, Woo said, promising to release Park’s travel records.

Woo also defended Park’s frequent contacts with Yang. “As all the journalists know, Park always replies to any message,” Woo said. “And once you start a conversation using text messages, the number grows quickly.”

The DUP says any investigation into Park has a political motive. Park was previously accused of receiving 500 million won from savings banks in return for using his influence to save them.