A wetter storm set to hit Korea from today

A wetter storm set to hit Korea from today 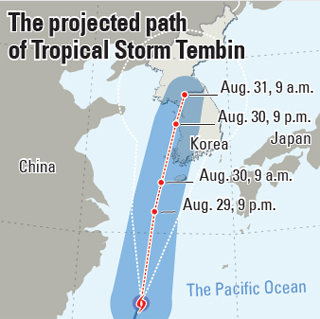 Tropical Storm Tembin, the Japanese word for the zodiac sign Libra, is forecast by the Korea Meteorological Administration to hit the country with heavy rainfall and winds starting today. The state-run weather agency reported that the new storm will be 120 kilometers (75 miles) southwest of Seogwipo on Jeju Island at 9 a.m. today.

Unlike Typhoon Bolaven, which passed along the west coast, Tembin is expected to pass through the country’s central regions, reaching 40 kilometers southeast of Seoul at 9 a.m. tomorrow with heavy rain and winds of up to 79 kilometers per hour (49 miles per hour).

“Tembin will make landfall in South Chungcheong Thursday night on its way to passing south of Seoul toward the East Sea,” said the agency. The intensity of Tembin is projected to be at the first level, or weak, when it nears the capital city early Friday.

Despite the low level of intensity, the storm is expected to drench parts of the central and southern regions, including Seoul, with up to 100 millimeters (3.9 inches) of rain. Some areas close to Mount Jiri in the southern regions and Jeju Island will see up to 150 millimeters of rain.

Tembin is projected to make its way off the peninsula and into the East Sea 80 kilometers northwest of Gangneung, Gangwon, at 9 p.m. tomorrow. “Though the upcoming storm is weaker than Bolaven, precautionary measures are needed as it will bring heavy rainfall accompanied by gale winds of around 108 kilometers per hour,” said Lee Hyun-gyu, a meteorologist at the weather administration.