From left: Scenes from the“Deranged,” “The Grand Heist and “Dancing Queen”. The movies are among seven that have surpassed four million at the box office this year. [JoongAng Ilbo]


It used to be that Korean film production companies adjusted the release dates to avoid coinciding with Hollywood movies. However, that has changed with the soaring popularity of Korean films.

As of last Sunday, “The Thieves” ticket sales topped 12 million and are expected to surpass “The Host,” which holds the record for Korean movie with 13.1 million.

A movie with ticket sales of four million is considered a box office success. Last year, five Korean movies reached that status; this year, with four months to go, there have been seven.

In addition, the market share for Korean movies was nearly 70 percent as of August, up from 53 percent at the start of the year, according to the Korean Film Council. At the time of its renaissance in the early 2000s, the Korean film industry’s market share was 50 percent to 60 percent.

Film experts point to the “high concept movie,” defined as attracting viewers with a concise and stimulating story line, as the reason behind this success. In a complicated world, such clear-cut messages can hold powerful appeal.

The plots of “The Thieves” and “The Grand Heist” are good examples. The first is based on a group of thieves who plan to steal a 30 billion won ($26 million) diamond, and the latter is centered on a gang that tries to steal ice blocks from the royal storage.

“Deranged” is about what happens when parasitic worms enter the human body, and “Dancing Queen” deals with a homemaker who dreams of being a singer.

“Movies that obtained more than four million viewers this year are mostly all high concept movies. Chungmuro has figured out the magnetizing pull Hollywood has used to attract its audience, and it is creating a Korean version of it,” said critic Kim Hyung-suk.

Chungmuro, a street in central Seoul, has been referred to as Korea’s center of culture, art and cinematography since the 1960s.

With an increase in marketing budgets, large-scale commercial movies - starting with “My Boss, My Hero” (2001) and “Marrying the Mafia” (2002) - have been more widely promoted and shown. They have tended to eschew serious reflection in favor of simpler dramatic themes, action and comedy. 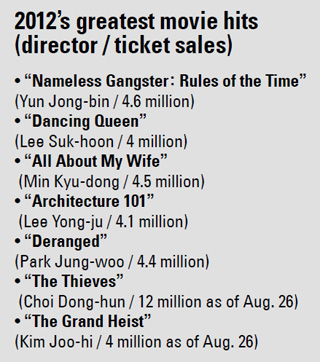 In addition, the Korean film industry has gotten better at producing seasonal movies targeted to summer audiences. “Haeundae” (2011), for example, a movie about a summer tsunami, drew nearly 11.4 million at the box office. The success of the film spawned other summer spine-chillers such as “Deranged.”

A few years ago, chats about insects infiltrating the human body were all over the Internet and apparently inspired director Park Jung-woo to come up with the idea for “Deranged.”

“It was essential to quickly convert this ‘insect syndrome’ into a motion picture, and the reason for its success was that it came out at the right time of summer vacation when youngsters would come out to watch it,” said the CEO of Ozone Film, which produced the movie.

Kim Taek-gyun, department chief of the film distribution company Showbox that produced “The Thieves,” said, “I think the number of movie spectators is rising because even if they are all commercial films, each of them is specifically committed to one kind of genre, such as action, romance, thriller and many more.”

Critic Kim Bong-suk said, “As well as bringing a variety of movies to Chungmuro, which is a place well set-up by competent directors such as Park Chan-wook and Bong Joon-ho, the amount of problematic movies that infringe upon the commerce of investment and publishing can be reduced.”