To Sunday: This large-scale retrospective of French photographer Henri Cartier-Bresson (1908-2004) will help viewers understand his importance in the history of photography.

The exhibition features about 250 works selected by Robert Delpire. Also on display are personal documents and records, including photos of his family, press credentials and letters.

The first section of the exhibition, titled “Aesthetics of the Moment,” focuses on photos that took “decisive moments” of daily life and made them look unfamiliar. Also among the exhibits is the iconic photo “Derriere la Gare Saint-Lazare.” 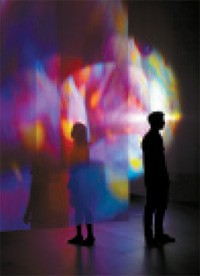 To Sept. 16: The solo show of 50-year-old Swiss artist Pipilotti Rist consists of a single work that lures viewers into a self-oblivious, dreamy state. Four moving oval images of luminous and vivid colors are projected onto translucent drapes hanging from the ceiling of the museum’s Black Box, a space dedicated to media art.

In nearby rooms, there is the “Artspectrum 2012” exhibition, part of the museum’s project to discover and promote emerging artists. The show includes works by media artist Kim Ayoung, photographer Bae Chan-hyo and installation artist Han Kyung-woo. 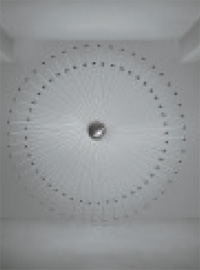 BRAIN - INSIDE OF ME

To Oct. 19: The exhibition sheds light on the relationship between brain types and creativity. The works of 14 artists illustrate types of creativity and the areas of the brain from which they originate.

To Jan. 20: The exhibition is another celebration of Nam June Paik’s 80th birthday. This one focuses on his works related to cybernetics and artists influenced by him. The exhibits include “TV Garden,” an installation of cathode-ray tube TV monitors among thick plants. It shows the artist’s visualization of nature’s energy waves in the images and sounds of television monitors, which relates to the concept of feedback in cybernetics. The show also includes “Marco Polo” and other Paik video sculptures.

Among the works by other artists is the 1979 film “Ancient of Days” by Bill Viola, 61, who is regarded as one of the most important contemporary video artists and once worked as an assistant for Paik.

Admission is 4,000 won. The museum is open 10 a.m. to 8 p.m. daily, except for the second and fourth Mondays of the month. Take bus No. 5000 or 5005 from Seoul Station or Sejong Center in central Seoul and get off at Singal five-way intersection in Yongin, Gyeonggi.