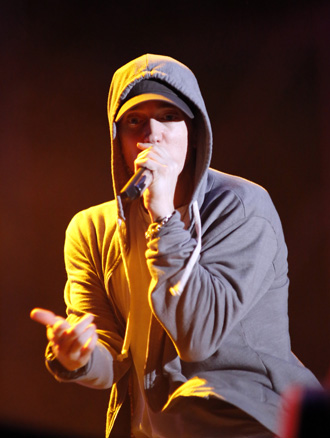 Eminem performs at his first concert in Seoul on Aug. 19. [YONHAP]

The Korea Media Ratings Board - which banned those under 18 from Lady Gaga’s “Born This Way Ball” - has filed a complaint against the production agency for Eminem’s Seoul concert on Aug. 19 for allegedly violating the Public Performance Act.

The board announced yesterday it filed the complaint against Access Entertainment at Mapo Police Station, central Seoul. The board said the songs submitted for approval were different from what the rapper sang Aug. 19 at Jamsil Sports Complex, southern Seoul.

The board said it decided that Eminem’s concert would be “harmless for minors” after reviewing program content documents and video clips of concerts submitted by Access Entertainment on May 15. “All the listed songs for the concert as well as video clips had no content inappropriate for minors,” the board said.

However, Eminem sang 26 songs, including 20 rated by the Ministry of Gender Equality and Family as “harmful for youths.”

“Eminem’s recent concert in Seoul did not include any of the 11 songs that were submitted to the board by the agency, and the rapper even induced the audience to repeat swear words during the concert, which is clearly inappropriate for minors,” said an official from the ratings board. “This violates the country’s Public Performance Act.”