Amateur greats Ko, Kim to face off in Turkey

Amateur greats Ko, Kim to face off in Turkey 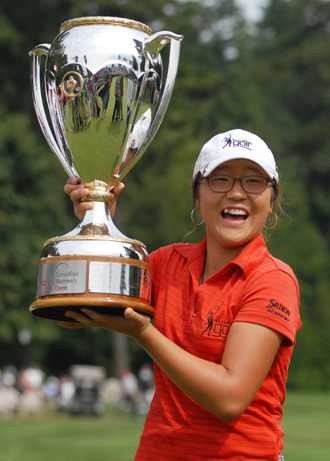 Lydia Ko, a 15-year-old Korea-born Kiwi who is the youngest amateur to win an LPGA title, said she is looking forward to competing against Kim Hyo-joo, another amateur sensation from Korea, as they represent their countries at the World Amateur Team Championships next month.

Ko, who won the Canadian Women’s Open on Sunday, is currently ranked No. 1 in the World Amateur golf rankings. Kim, 17, who finished fourth at the Evian Masters last month, is No. 2.

Ko will play for New Zealand at the World Championships to be held in Antalya, Turkey, on Sept. 27, where Kim is also scheduled to compete as a representative of Korea, the defending champions.

“It will be an interesting duel,” Ko said in an interview with the JoongAng Ilbo in Incheon on Wednesday, referring to competing with Kim next month. She was in Korea for the first time since she immigrated to New Zealand at the age of 6.

The World Championships could be the final amateur matchup for the two rising golfers as Kim plans to turn professional next month.

A sophomore at Seoul’s prestigious Daewon Foreign Language High School, Kim won the Lotte Park Ladies Open in April, becoming the first amateur in nearly two years to win an event on the KLPGA Tour, home to a throng of Seoul Sisters dominating the LPGA Tour.

Two months later, she won the Suntory Ladies Open in Japan, becoming the youngest golfer to win a JLPGA event.

Ko said she would think about turning professional as early as 2014, while attending college. She said she wants to go to a university in the United States, hopefully Stanford, the school her heroine Michelle Wie is attending. Playing as an amateur is still satisfying, she said.

“I am an amateur, so I don’t put such significance on the results at the professional events,” Ko said, referring to the Canadian Open, where she became the first amateur winner since JoAnne Carner in 1969. Ko also became the youngest to win a professional event in New Zealand at the New South Wales Open in January. “I prefer being an amateur for now.”

Korea won the 2010 biennial World Championship for its second title.