Real storms back to take Super Cup from Barca

Real storms back to take Super Cup from Barca 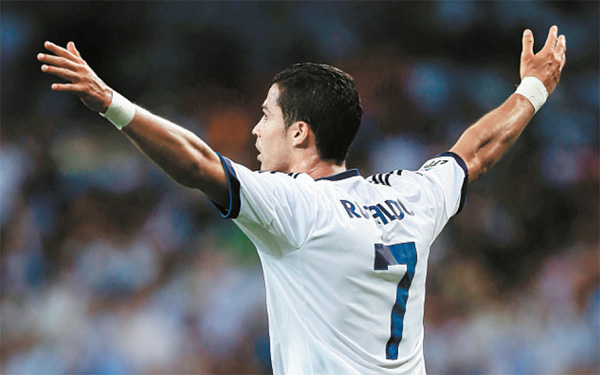 
MADRID - Real Madrid claimed its first Spanish Super Cup in four years and a morale-boosting success against its arch-rivals when Gonzalo Higuain and Cristiano Ronaldo struck in a 2-1 win against 10-man Barcelona on Wednesday.

The victory over error-prone Barca, who had Adriano sent off in the 28th minute, meant the tie finished 4-4 on aggregate after the Catalans won last week’s first leg 3-2 at the Nou Camp and Real took the trophy on the away goals rule.

It was a much-needed success for Jose Mourinho’s side after Real failed to win in the opening three matches of the season and crashed to a shock 2-1 defeat at city rivals Getafe in La Liga on Sunday.

Mourinho had warned his players he wanted a vast improvement and they responded with two goals inside 20 minutes thanks to poor Barca defending that allowed first Higuain on 11 minutes and Ronaldo eight minutes later to burst free and score.

Lionel Messi gave Barca a chance of pulling off an unlikely comeback when he curled in a spectacular free kick from 30 meters moments before the break.

Pedro drew a brilliant save from Iker Casillas and both sides had chances in a frenetic ending but Real held firm to end Barca’s three-year grip on the trophy.

The second-leg victory also broke Barca’s seven-match unbeaten streak at the Bernabeu and was Real’s first home win in a “Clasico” since May 2008.

“At the Nou Camp they had a chance for a fourth goal and in the next move we scored the one that kept us in with a chance,” Casillas said in an interview with Spanish television.

“We dominated the first half and the match in general, although we had to suffer a bit at the end,” he added.

“We were on a poor run and we owed this to the fans. We haven’t started the season well but some days you have good luck and some you don’t.”

Real’s opening goal came when Javier Mascherano, playing his 100th game for Barca, failed to clear a long ball from Pepe and Higuain raced clear and fired a shot under Victor Valdes.

Mascherano’s central defensive partner Gerard Pique was then at fault for Real’s second.

Ronaldo beat the Spain international to the ball and although the Portuguese forward’s chance appeared to have passed as the defense regrouped he loosed off a shot that flew high into the net off Valdes.

Barca were down to 10 men just under 10 minutes later when Adriano hauled Ronaldo down as he homed in on goal and the Brazilian was deservedly shown a straight red card.

World Player of the Year Messi lifted Barca with his 45th-minute stunner, leaving Spain captain Casillas flailing at thin air as the ball rocketed past him into the net.

The goal put the Argentina international level with former Real striker Raul on 15 goals in “Clasicos” and three short of the record held by Real great Alfredo Di Stefano.

After Pedro’s effort was saved by Casillas, Valdes produced perhaps the best of a slew of excellent saves to deny Sami Khedira and Higuain sent a shot spinning away off the outside of a post before Messi had a great chance to win the Cup for Barca in one of the last moves of the match.