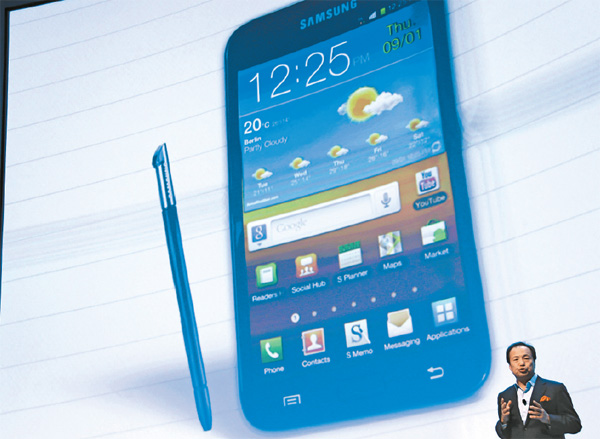 
Samsung Electronics has unveiled a new version of its pen-equipped Galaxy Note smartphone as it seeks to defend its lead over Apple amid global patent disputes with the iPhone maker.

The model has a 5.5-inch screen, larger than its predecessor, and runs the latest version of Google’s Android operating system. The device is loaded with software that recognizes handwriting from a digital pen.

“The Note has evolved from every smartphone that we have launched,” Cho Min, a senior manager for Samsung’s mobile unit, said in an interview at the IFA consumer-electronics fair in Berlin on Wednesday (Europe Central Standard Time).

“We can address more consumers and more market opportunities because we can provide the capability of smartphones and tablets at the same time.”

Samsung, the world’s top smartphone seller, is offering a variety of Galaxy handsets, with different sizes and features, to attract consumers from narrower choices offered by Apple. The new Galaxy Note may also help to cushion the impact of a potential U.S. sales ban on some of Samsung’s other smartphones.

More than 10 million units of the first Galaxy Note were sold in the first nine months, helping Samsung regain the lead in global smartphone sales from Apple this year. The updated digital pen will allow consumers to hover over the screen to preview contact and will be available for third-party applications.

Samsung also unveiled a 16-megapixel camera, called the Galaxy Camera, that runs the latest Android operating system and is able to access the Web via Wi-Fi technology and mobile networks.

“Android was the best option when we considered our platform,” Cho Won-hyung, an assistant manager at Samsung’s digital imaging business, said in an interview. “We wanted access to Android with the Google Play store and to make the full set of camera apps available.”

Samsung opted to tie the camera to the Galaxy range of handsets to associate it with the Android platform, Cho said. With the Galaxy series, which encompasses smartphones and tablet computers, “we had one empty category.”

The brief announcement on Wednesday at the Berlin electronics show comes amid expectations that smartphone makers may turn increasingly to Windows devices after a U.S. jury decided many of Samsung’s Google Android-based phones infringed Apple patents.

“It looks like a good phone, and seems like a pre-emptive announcement ahead of Nokia,” said Sid Parakh, an analyst at investment firm McAdams Wright Ragen, of the Samsung phone.

“Microsoft or Windows never got their best teams, never got their best designs, just because Android was doing so well. With the change in the legal environment, there’s a case to be made that Samsung will likely shift some of those resources to broaden out or diversify their own exposure.”

Nokia, the ailing Finnish mobile firm, once the world’s leading producer of phones but now struggling to reverse losses, is due to unveil its new Lumia line of smartphones using Windows Phone 8 in New York on Sept. 5.