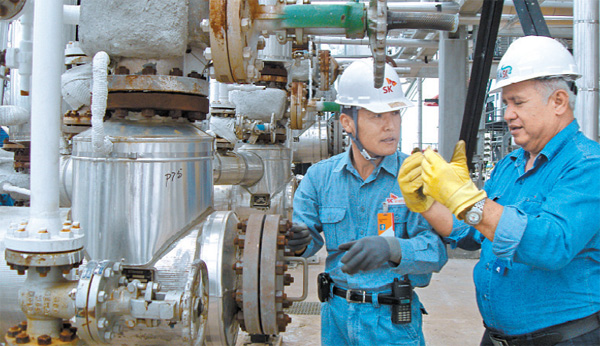 SK Lubricants employees of the Indonesian Dumai base oil plant


SK Innovation has changed its name from SK Energy last year with the intention to move forward with innovation, change and future growth.

The achievement was due in part of the speedier and more flexible decision-making process, tailored to each market in the face of rapidly changing demands. The success was repeated in penetrating emerging markets like Vietnam.

From its 47 years of experience of operating petroleum and petrochemical factories, SK Energy successfully takes on emerging markets armed with knowhow and advanced technology.

The company signed an O&M (operation and maintenance) contract for production facilities with Formosa, a Taiwanese company, in 1998, and Pertamina, an Indonesian company, in 2008. Further, in 2009, the company signed an O&M with BSR (Binh Son Refining & Petrochemical), the first oil refinery in Vietnam. SK Energy expects to garner $78 million of revenue until 2014 from the above contract and a $12 million increase in sales from its contract with BSR’s petrochemical factory.

Advancing into Russia with quality

SK Lubricants, a lubricant and base oil specialized company of SK Innovation, has advanced in Russia a decade ago. Its main product ZIC has recorded fourth in imported lubricant market in Russia, marking a successful landing. In the country of harsh winters where the demand for quality engine oil is high, SK Lubricants products made inroads into the country with relative easy due to the high quality of its products.

In March last year, the ZIC A+ was selected the best among its lubricant oil market in a survey conducted by Za Ruleum, a well-known automobile magazine, and Saint Petersburg State University. SK Lubricants is well on its way of becoming the top 3 imported lubricant oil producer in the northern Eurasian country.

2012 is designated the year of global leap by SK Lubricants as it is expanding its portfolio, forming new partnerships and to tap into new markets in China, Russia and India.

SK Lubricants expects to raise its name value in China through its Tianjin factory which went into operation.

The goal is to sell an annual 114,000 ton of lubricant oil in China by 2015, similar to its sales in Korea. It also plans to make inroads into India through tailored strategy.

An executive at the company said, “By building a factory in China and by strengthening our position in Russia and India, we are planning to expand our market share abroad through emerging market strategy. We will rise as a base oil and lubricant oil power player.”