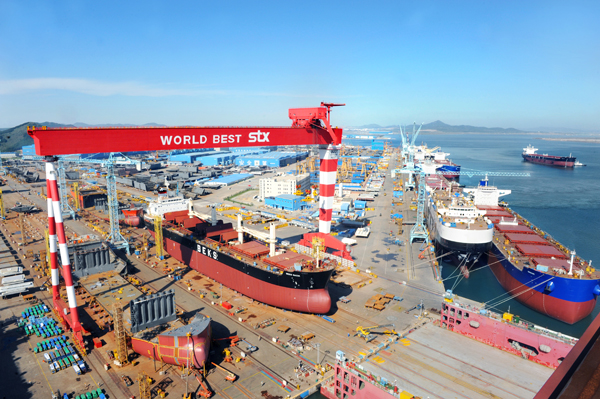 STX Dalian Shipbuilding Complex is located in a port city in the Liaoning Province, northeast China.


STX Group is realizing its dream to become a shipbuilding power in China.

The world’s fourth-largest shipbuilder has a global reach spanning Northeast Asia and Europe.

Its shipbuilding complex in Dalian, China, is an example that sets STX apart from others in Korea, the hub of shipbuilding powerhouses. Though STX currently boasts its presence as one of the largest in the European Continent, its Dalian Shipbuilding Complex is the first shipyard it built overseas and is now the center of global network. The area in Changxing, where Dalian complex is located, used to be a sea cucumber farm but is now transformed into one of the largest shipyards in the country with active support from the local government.

Dalian complex boasts the world’s largest offshore plant facility across a 59.2 million-square-foot space and employs some 28,000 staff on the shipyard in the port city in Liaoning Province.

Since its groundbreaking ceremony in March 2007 and steel cutting for ship block production in April 2008, the shipyard delivered two 58,000-deadweight-tonnage bulk carriers by April 2009. STX further equipped the plant’s production system by delivering drillships in last May and July of this year.

Dalian shipyard maximizes the strengths of STX in manufacturing not only shipbuilding parts but also engine parts, blocks, marine plant and all other vessel-related products.

The much heralded automated system oversees planning, designing, obtaining and producing, and it shares the shipbuilding plan and process real time with the employees helping further cooperation. At the beginning of the year, STX Dalian announced its plan to meet the goal of $5 billion in orders and $2.1 billion in sales in the shipbuilding and offshore sector this year. To meet this goal, STX is expanding its business overseas, securing the newest technology and ensuring the best price competitiveness, evinced by its plans to deliver 33 ships this year.