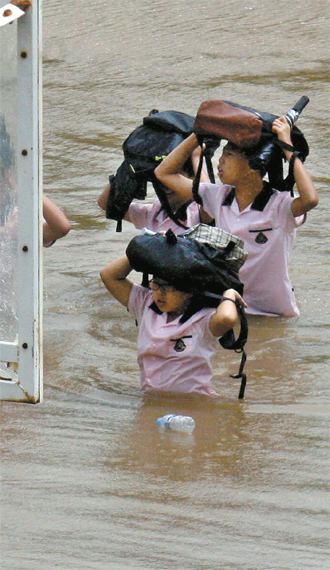 Students wade through a flooded street yesterday in the coastal city of Mokpo, South Jeolla, as Tropical Storm Tembin inundated some parts of the city with heavy rain. Many parts of the Jeolla region were drenched. [NEWSIS]

The country’s southern regions got drenched with heavy downpours yesterday, just two days after Typhoon Bolaven hit them, as Tropical Storm Tembin swept through on its way to the East Sea.

The southwestern coastal city of Mokpo, South Jeolla, was hit hardest with over 170 millimeters (6.7 inches) of rain yesterday, and many parts were inundated. Over 1,900 homes were flooded, and 33 people were made temporarily homeless yesterday, according to the South Jeolla Disaster Center.

City officials said flooding in the center of the city, which occurred for the first time in 13 years, happened partly due to damage done by Typhoon Bolaven on Tuesday.

“Large amounts of tree branches and leaves broken off by Bolaven Tuesday clogged the city’s drains, partly contributing to the inundation,” said Lee Sang-hun, an official at the disaster center.

Seoul and its surrounding areas, however, were spared major damage after Tembin, the Japanese word for the Libra zodiac sign, changed its expected course and veered eastward toward Gangwon and the East Sea. The eye of the storm will be located 40 kilometers (25 miles) northeast of the coastal city of Gangneung, Gangwon, at 6 a.m. today.

The state-run weather agency had warned of expected damage despite Tembin’s weakness compared to Bolaven and forecast it would bring heavier rains, and it did.

The South Jeolla emergency center estimated yesterday the amount of property loss caused by Bolaven and Tembin in the province at 89 billion won ($78.4 million) as of 1 p.m.

“We expect the figure to be well over 100 billion won,” said Lee of the emergency center.

The heavy rains led to the cancellations of five incoming and six departing international flights at Incheon International Airport as of 4 p.m. A total of 167 vessels were banned from departing 93 harbors in the country, according to the National Emergency Management Agency. The government banned entry to all 20 national parks for safety’s sake.

At noon today, the eye of the storm will be above the East Sea 130 kilometers east of Sokcho in Gangwon.