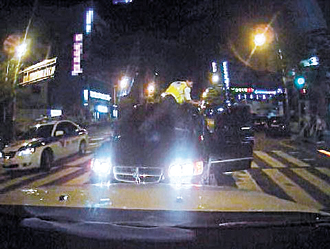 Traffic policeman Kim Hyun-cheol, 33, hangs onto the windshield of a car owned by a 33-year-old man on the police’s wanted list for using illegal drugs in Yeonje District, Busan on Sunday. The suspect tried to escape after being caught by Kim for making an illegal U-turn. Video of the incident was taken by a camera installed in the back of a taxi. Still taken from YouTube


Korea has discovered its own John McClane, the cop in the Die Hard movies who will do anything to keep a criminal from getting away with his crime.

At 9:30 p.m. on Sunday in downtown Busan, 33-year-old traffic policeman Kim Hyun-cheol spotted a Hyundai Trajet making an illegal U-turn. He waved it over and started writing up a ticket, checking out the number on the front license plate.

Little did Kim know that the driver, identified by his surname Jeong, 33, had something in his past to hide. Getting caught by the police was not in his interest.

“He looked as if he was afraid of something,” Kim said later. “He only opened his window an inch.”

Jeong stepped on the gas ? even though Kim was right in front of his car. Kim instinctively jumped on the hood of the car.

Jeong started speeding through the streets of Busan with the young officer clinging to the roof of his car, his feet at the base of the windshield.

Jeong tried to dislodge the officer, swerving the car from side to side and slamming on the brakes. But Kim couldn’t be gotten rid of for 25 minutes of driving through Busan.

“I hung on the car persistently because I suspected him to be a criminal,” Kim told reporters later. “I thought I might be killed for the first 10 minutes. But I hung on with my willpower because I really wanted to arrest this guy.”

Eventually, Jeong faced the nemesis of many absconding criminals: traffic. He tried driving down the opposing lane, but got trapped by a taxi. 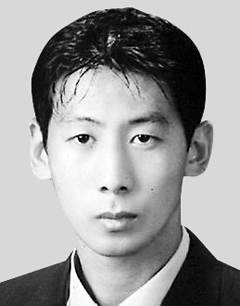 Police cars finally blocked Jeong from the sides and the back and he tried to flee the scene, but was arrested after being chased 200 meters (656 feet) at an underpass of a city train station of Yeonje Metro in Yeonje District.

A check by the Yeonje Police Precinct found that Jeong is on a wanted list for using illegal drugs. The police detained him Monday.

As for hero Kim, the police said he was bruised on the chest and legs and his healing would take three weeks. The police said Kim holds many martial arts certificates, including in Taekwondo.

His bravery was filmed by a camera installed in a taxi that was uploaded onto Youtube.

Many reactions were posted by Korean netizens. The video was spread on Twitter, and retweeted more than 400,000 times.

“I didn’t tell the story to my family,” Kim said, “because I didn’t want them to worry about my injuries.”