Delivering babies tough due to lack of ob-gyn clinics

Delivering babies tough due to lack of ob-gyn clinics

Han Bu-gyu, a 45-year-old man from Hadong County in South Gyeongsang, drives his pregnant Vietnamese wife by scooter to Jinju, one and a half hours away, for her ob-gyn checkup as there is no obstetrician clinic in their county. There are 54 cities, districts and counties nationwide that do not have obstetrician clinics for expecting mothers. By Park Jong-keun


A 30-year-old pregnant woman in her third trimester surnamed Hong from Yeoju County, eastern Gyeonggi travels all the way to Icheon an hour away by bus for checkups.

That is because in Yeoju, there are two obstetric and gynecology clinics but neither are delivering babies any longer.

Though pregnant, she takes the bus, with a transfer at the Yeoju Terminal to get to Icheon, a process which takes three hours to get to the clinic and then back home.

And she had to repeat the process over 10 times during the course of her pregnancy, just to receive regular checkups.

“I am due this month, but it is worrisome since I don’t know when the contractions will come,” she admitted.

Every year, some 900 pregnant women in the county have to seek childbirth care in Icheon, Wonju or Bundang.

Lee Hyun-suk, 49, a Yeoju County health official, said, “We requested four obstetricians jointly establish an ob-gyn clinic here, but it was all in vain.”

The low birth rate in Korea is partly related to difficulties in the process of giving birth due to a decline in infrastructure and doctors, the JoongAng Ilbo and the Planned Population Federation of Korea found as they conducted an investigation into the reason behind the low birth rate here.

Yeoju is not an isolated case. There are 54 cities, districts and counties nationwide that do not have maternity wards for expecting mothers, though there were 18,769 births in these areas, according to the Ministry of Health and Welfare. 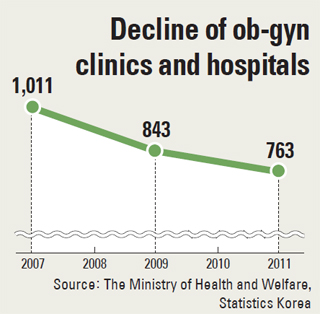 Another 32 cities, counties and districts including Haenam County in South Jeolla, have only one ob-gyn clinic, which is at risk of disappearing as well.

And the number of clinics and hospitals offering ob-gyn services has drastically declined over the course of five years, numbering 1,011 in 2007 to 763 in 2011, according to the Ministry of Health and Welfare and Statistics Korea.

In order to maintain a delivery room, there needs to be at least 20 childbirths per month, but half of the ob-gyn clinics and hospitals have less than 15 births per month, so there is a danger that these will also shut down.

Gangseo District, though it is part of the country’s second largest metropolis, Busan, is facing the same crisis.

Kim Jin, a Gangseo District health official, said, “It’s been a long time since there has been a new ob-gyn clinic in the district. When a new apartment complex is built, we hope things will change.”

Likewise, the number of obstetricians is also on the decline. In 2000, there were 250 new ob-gyn specialists, but that decreased to 90 this year and only 10 of those are men. Consequently, 45 percent of obstetricians are over the age of 50.

This disintegration in childbirth infrastructure comes as Korea is reporting one of the lowest childbirth rates in the world. The government has pumped some 10 trillion won ($8.8 billion) into boosting birth rates here, which inched up to 471,000 births in 2011 according to Statistics Korea, slightly up compared to the previous year but still dismally low.

Korea’s total fertility rate is 1.23, the lowest among the member countries of the Organization of Economic Cooperation and Development and one of the lowest at 217th among 222 countries around the world.

So, in a vicious cycle, the decline in births leads to a decline in obstetrics clinics and doctors, which in turn makes it more difficult to give birth.

“At this rate, in 10 years it looks like we will have to bring in doctors from abroad,” said Shin Jung-ho 41, secretary-general of the Korean Society of Obstetrics and Gynecology and professor at the Korea University Guro Hospital. “And the liability of compensation for medical accidents regarding childbirth should not fall upon doctors.”

The Korean Society of Obstetrics and Gynecology also conducted a study between June to Aug. 15 of 559 ob-gyn doctors and found that 28 percent of them do not perform child delivery.

Three out of five of the obstetricians who stated they gave up on delivering babies claimed it was because it was “too stressful.” They had to be on call all night, which became more difficult, especially as they grew older. If there was an accident or a mistake, there clinic could be shut down, so they no longer delivered babies.

Over 90 percent of doctors stated they would refuse to work in vulnerable areas, and one doctor said it was because “they don’t want to get caught in a lawsuit in emergency cases when it takes too long to transfer the mother to the hospital and she dies.”

A 30-year-old woman from Daejeon was a high-risk patient pregnant with twins through in vitro fertilization. Last December, 23 weeks into her pregnancy, her water broke and though she tried to go to a big university hospital in Daejeon from her local clinic, there were no beds available in the childbirth intensive care unit.

She tried Seoul National University Hospital, but likewise there was no space, so she finally sought the Samsung Medical Center emergency room and gave a premature birth two days later.