Museum to show artifacts from market of Joseon era

Museum to show artifacts from market of Joseon era 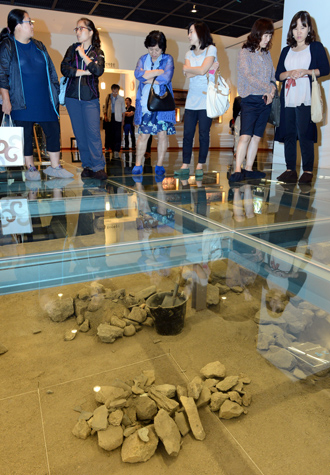 Yukeuijeon Museum in Jongno, central Seoul, opened yesterday where spectators can take a look at remains of government-licensed shops during the Joseon Dynasty(1392-1910) through thick glasses beneath their feet. [NEWSIS]

In 2008, cultural heritage officials faced an embarrassing problem: whether they should approve the construction of a new building on the site of a newly found cultural property.

The place in Jongno, one of the busiest shopping streets in Seoul, was where a market known for selling six items - silk, raw silk, cotton, paper, ramie fabric and fish - stood during the Joseon Dynasty (1392-1910). In the market called yukeuijeon, only government-approved merchants were able to sell those items in shops owned by the government. They were obliged to meet government offices’ need of the items on sale.

Remains of haengrang, a room attached to one of those shops for use as a storage or a living space, were discovered at the construction site of the building months before.

After having heated debate over the historical value of the remains, a committee of the Cultural Heritage Administration decided to ban the construction and preserve the site.

The owner of the building then devised a brilliant idea along with a civic activist named Hwang Pyeong-wu: to build a new building with a museum on the basement floor to preserve and display the remains. That’s how the “yukeuijeon museum,” which opened Thursday, began.

“The museum is a model case of meeting both needs of preserving a cultural asset and urban development,” Hwang, who became chief of the museum, said.

“Countless numbers of development projects are underway in Seoul, but traces of the past are barely preserved in their original state,” he said. “After an archaeological survey is completed, many are bulldozed or moved to other places for exhibition.”

Visitors can gain a glimpse of the 15th- and 16th-century market while walking on a large-sized glass plate laid over the remains. They can also look at the remains without a glass plate by using a stairway.

Materials on the history of Joseon-era markets and showing how items were traded there are also on display in the museum.