Healing Trail is all about the journey

Healing Trail is all about the journey 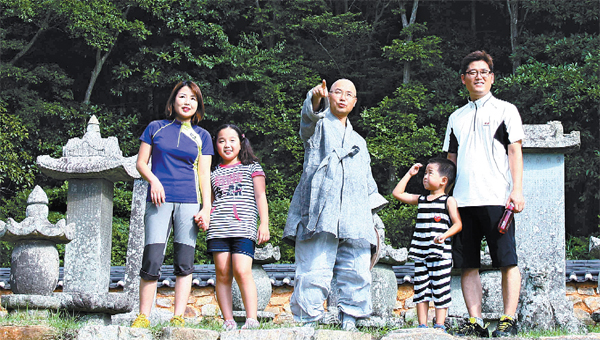 Kum Kang, center, the head monk of Mihwangsa Temple, on Mt. Dalma in Haenam, South Jeolla, points to the Healing Trail, a 11.5-kilometer path leading down to Saja Port, as he and Seo Yang-won, right, Hwang Sun-hwan, and their two children, Eun-byeol, 9, and Eun-hyeok, 7, prepare to begin a walk last month. By Oh Jong-chan


Since the Olle trail on Jeju Island opened to the public in 2007, many walking trails have been discovered and developed across the country.

One worth considering, according to the JoongAng Ilbo, is the 11.5-kilometer (7.1-mile) Healing Trail that leads to Mihwang Temple in Haenam, a seaside county in the south of South Jeolla.

The trail starts from Saja Port in Haenam and winds through evergreen forests and along sandy seashore en route to the Buddhist temple. It also traverses a good deal of history.

The port is in the village of Ttangkkeut Maeul, meaning “the end of the road,” a well-known tourist destination in the southernmost area of the Korean Peninsula. 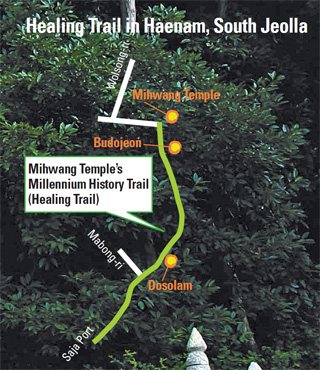 Northeast of the village is 489-meter (1,604-foot) Mt. Dalma, whose name derives from dharma, a Sanskrit word for truth. At the top is the beautiful Mihwang Temple.

Seen from the town of Seojeong, the roof of the temple appears to be floating among the surrounding camellia and pine trees.

Mihwang is already famous among those who enjoy temple stays, attracting the largest number of visitors among all Korean temples that have stay programs, according to Kum Kang, the temple’s head monk.

Kum Kang says the temple was not well known and surrounded by camilla trees and weeds when he arrived 20 years ago. It became famous five or six years ago, he says, as word of the temple’s 1,200-year history spread.

A growing number of people have visited the temple, and the trail leading up to it - which some locals call “The Millennium History Trail” - has been developed in part naturally and in part by the local government, he says.

According to the monks, the legend of the temple is written on a stone set up in 1692 in the 18th year under the reign of King Sukjong, the 19th king of the Joseon Dynasty.

“A stone-made ship reached Saja Port in the eighth year of Silla, King of Gyeongdeok (749 AD). A golden man (man made of gold) was rowing the ship, which was filled with Hwaeomgyeong, Beophwagyeong, (both famous Buddhist scriptures), the statues of Munsubosal (the Bodhisattva of Wisdom) and Buddhist paintings.

The view of Saja Port and the sea beyond, left, contributes to the peace and calm of Mihwang Temple, which operates Korea’s largest and most famous temple stay program (right). [JoongAng Ilbo]


The residents of Saja Port who found the ship were discussing where to keep those treasures, when a black cow suddenly appeared.

The golden man said, “I am the king of a country called Ujeon and have searched for a place to enshrine these Buddhist scriptures and statues. Then I have come here realizing there are 10,000 Buddhas in this mountain. Please carry these onto the back of the cow and bury them in the place where the cow lies down and never gets back on its feet.”

That is the site of Mihwang, according to Kum Kang. The name of the temple also comes from the legend. “Mi” is from the sound of the cow crying, while “Hwang,” meaning yellow, refers to the color of the golden man.

The country, Ujeon, which also appears in the “Great Tang Records on the Western Regions,” a journey essay written in the seventh century by China’s famous monk Xuanzang, is known to have been located in what is now Hotan in the Uighur Autonomous Region in Xinjiang, China.

A small wooden plaque on a big oak tree tells hikers that this is the road to the temple. It is so small and amateurish that some might pass by without noticing it.

Whole segments from the trail to the temple toward Saja Port are humble and remote, with few traces of human presence.

Tree branches heavy with acorns are here and there, and one can see shells on the ground left by squirrels already busy hoarding food for the winter.

In autumn, the trail will be bursting with mulberries, gooseberries, clematis berries and hazelnuts.

Many trees lining the road have large leaves that shelter visitors from the direct heat of the sun. Even at the peak of the summer, the roads are cool.

About 30 minutes into the walk there is a wide, flat area that is an ideal place for a few moments of meditation. 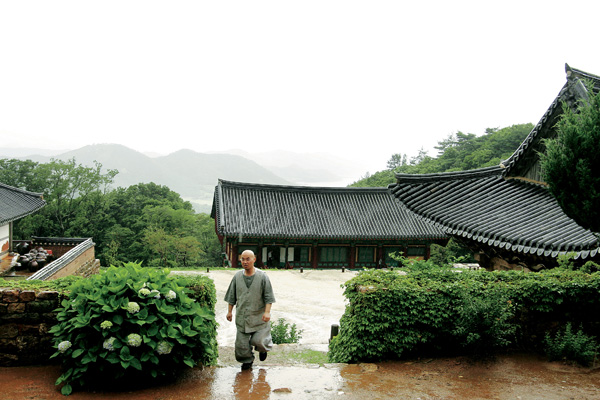 The Mihwang Temple possesses serene beauty and some may find the Healing Trail does as well. [JoongAng Ilbo]


At the minimum, a rest is advisable in order to fully appreciate the beauty that those walking through the forest will encounter about an hour farther ahead.

On the way to Mihwang, there is a small temple near a stream, called Dosol Stream, that is so clean that the Buddha visited there before he came into the world, according to local legend.

Walking the entire length of the trail takes about an hour and a half. If it does not seem long enough, hikers can always turn around and go back the way they came.

There is another healing program at the temple that you might want to attend.

Mihwang Temple does not take a single day off for its stay program. The program started in 2002 and about 40,000 people have participated, including 5,000 last year, according to Kum Kang.

It is an open-ended program, so participants can stay for any length of time. There is one fixed-period program called “Scent of True Love.”

The eight-day silent retreat starts on the last Saturday of each month and is composed of programs that include silent time, periods of meditation, Buddhist rituals, hiking and conversation over tea.