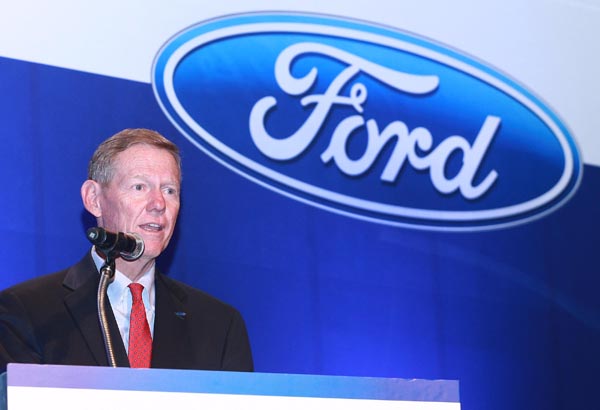 Ford’s President and CEO Alan Mulally announces his ambition to expand sales in Korea during his visit to Seoul yesterday at the Grand Hyatt Hotel. [NEWSIS]

At a press conference held in Seoul, the 66-year-old chief said the automaker has aggressive plans to build brand awareness and grow sales in Korea.

“Ford is a growing company operating in a growing global automotive market, and Korea represents a key opportunity for Ford,” Mulally said. “Our growth plan reflects Ford’s commitment to provide Korean customers with a full family of best-in-class products and a retail experience that is second-to-none.”

Ford has been performing well in Korea’s imported car market. From January to July, it sold 2,791 units, up 28 percent from a year earlier.

Despite the sales growth, Ford’s market share of the import market has slightly decreased as German and Japanese brands have also seen strong sales. It currently owns 3.82 percent of the import market, down 0.16 on-year, ranking it seventh among foreign brands. 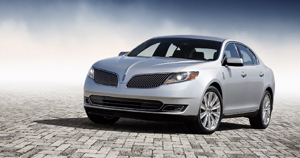 Mulally said the company is pleased with how sales are going in Korea, but will give growth a shot in the arm by launching six all-new or significantly revised models in the coming months.

With its “One Ford” plan, the company will accelerate product introductions.

The company said it will launch new Taurus, Lincoln MKS and Mustang models in Korea, as well as all-new versions of its Escape, a small SUV; its Fusion, a midsize car; and its diesel-fueled compact, Focus. 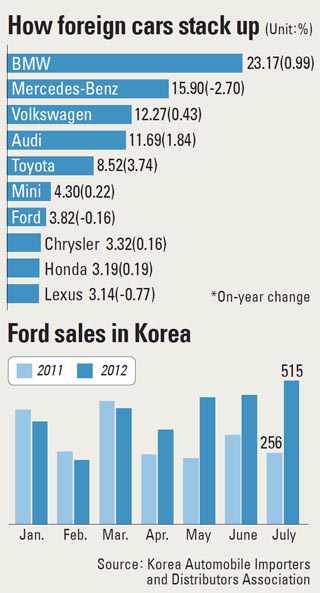 In addition, early next year, Ford will launch an all-new Lincoln MKZ and new hybrid versions of the all-new Fusion.

Mulally, who formerly served as executive vice president of Boeing, said that the free trade agreement between Korea and the United States that took effect on March 15 enabled the company to bring more vehicles to Korea at a greater profit.

“Ford is specifically well known for believing in FTAs,” he said. “We saw that FTAs reduce our costs, so we’ll have a better service and system.”

Following the implementation of the Korus FTA, Ford was also able to lower the prices of its vehicles this year by up to 5.25 million won ($4,600), while also slashing up to one-third of its auto prices in Korea - more than any other foreign brand.

The CEO, who joined Ford in September 2006, said the company’s Lincoln models will also have a different look. Although they are mostly front-wheel drive vehicles, Mulally said he still expects them to appeal to domestic motorists.

“Other luxury brands are changing to adopt front-wheel drive vehicles in their lineup because of fuel efficiency,” he said. “A completely differentiated Lincoln vehicle is coming, so consumers should get ready for that.”

To accelerate sales, Mulally said Ford needs to enhance its brand awareness, adding that it plans to triple its marketing budget.

Ford recently launched its “Seoul to Soul” brand campaign, which chronicles the experiences of 10 influential Koreans, and gives consumers access to Ford’s products and facilities at its global headquarters in Dearborn, Michigan, as well as to its Dunton Test Track near London.

“This is a unique brand campaign for Korea [that is] designed to capture Koreans’ authentic reactions as they experience Ford cars and technologies in new and unexpected ways,” said Ford Korea President Jung Jae-hee.

“It’s great to have such strong support from our CEO and Ford’s entire global management team as we seek to redefine and build the Ford brand here in Korea,” he said.

This is the third time this year that the CEO of a major global automaker has visited Korea after Toyota’s Akio Toyoda and Carlos Ghosn of the Renault-Nissan Alliance.