Textile manufacturer Kolon Industries is banned from selling its high-tech aramid fiber in the United States and other countries for 20 years, a U.S. court ruled yesterday, because it used technology stolen from U.S. chemical giant DuPont.

The ruling came only six days after Korean IT giant Samsung Electronics lost to U.S. rival Apple in the so-called the “patent war of the century.” 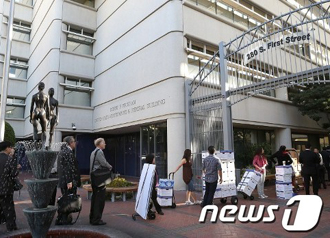 Judge Robert Payne at the Eastern District Court of Virginia, who was a former lawyer at law firm McGuire Woods representing DuPont, ordered on Thursday that Kolon stop producing and selling products made from its para-aramid fiber, dubbed Heracron, in the United States and other markets for two decades.

The judge cited a jury verdict from a trial last November that said Kolon stole confidential technology information from DuPont to produce the material.

The jury awarded Dupont $919.9 million in damages for stealing trade secrets. Kolon has been preparing to appeal the ruling to avoid paying damages that are equivalent to about 70 percent of its total assets.

Kolon’s Heracron is mainly used in making body armor, competing with DuPont’s trademarked synthetic fiber Kevlar, which the company developed and has sold since 1973.

Three companies currently control the global market for aramid, although DuPont has by far the largest share of about 90 percent of the 60,000-ton market, according to industry analysts. It is followed by Japanese company Teijin, which calls its product Twaron. Kolon is the third player in the market with its Heracron fiber.

It started commercial production in 2005 and has exported about 3 billion won ($2.6 million) worth of aramid products to the United States.

DuPont argued that Kolon stole information about how Kevlar is made. The information was allegedly given to Kolon by a former DuPont employee who was later hired by the Korean company, DuPont said.

Kolon immediately released a statement yesterday, saying it will request a suspension of execution of the ruling.

“We express deep regret about the global sales ban on Kolon’s Heracron by the U.S. court and will take stern measures,” the statement said. “The latest ruling lacks legitimacy both in terms of legality and factual relevancy.”

Kolon’s lawyer, Jeff Randall, said DuPont was trying to block fair competition in the global aramid market through the lawsuit. He pointed out that the U.S. court unfairly excluded testimony of Kolon’s innocence, and said there were numerous procedural errors in the Virginia trial.

The company also said there is no sufficient evidence proving Kolon stole information.

Kolon recently showed its production site in Gumi, North Gyeongsang, to local media with an aim to prove its 30-year efforts to develop the aramid fiber technology.

The Korean firm starting developing aramid 33 years ago in cooperation with the late Dr. Yoon Han-shik, an expert at the Korea Institute for Science Technology Research, to localize aramid technology.

Yoon received patents for the technology in seven countries, including the United States and United Kingdom, in 1985.

Delaware-based DuPont and Amsterdam-based AkzoNobel raised issues with the patents that Yoon earned at the time, and the three were embroiled in a patent infringement suit. Yoon claimed victory as a European court ruled in favor of Yoon in 1991.

DuPont, however, didn’t surrender to the result, continuing to pressure Kolon in various ways, including hindering the company from securing raw materials to produce the aramid fiber.

Kolon shares retreated 1.36 percent on Seoul’s main bourse after the news broke to close at 21,800 won. The company’s shares have been on a bearish run for the last six trading sessions.
By Song Su-hyun [ssh@joongang.co.kr]