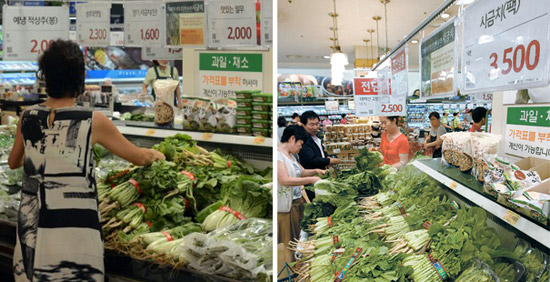 After Typhoon Bolaven caused havoc in the southern regions earlier this week, Typhoon Tembin added to the misery in South Jeolla and central Korea on Thursday, especially for farmers and consumers hoping for cheap produce as they stock up for the nation’s all-important Chuseok holiday.

Chuseok, or Korea’s harvest festival, falls this year on Sept. 30, but Koreans celebrate with a three-day holiday that sees families reunite at their ancestral homes, pay respects to their forefathers and celebrate with bounteous feasts.

According to Seoul Agricultural and Marine Products yesterday, the price of 10 kilograms (22 pounds) of first-grade zucchini rose 41.7 percent to 40,048 won ($35.31) from a day earlier at Garak Market, a large wholesale food market in Seoul’s Songpa District.

Zucchini prices soared due to a series of heat waves that left the nation in a collective sweat before the onset of last week’s torrential downpours. Fishery prices also jumped, with the price of gizzard shad surging fourfold.

The sweltering heat and seasonal storms had already been causing prices of leafy vegetables and marine products to fluctuate wildly from day to day, according to industry sources.

After the two major typhoons lashed the country, the wholesale price of 10 kilograms of first-grade chives rose 90.9 percent yesterday to 52,247 won from a day earlier. The price of 300 grams (10.6 ounces) of premium spinach surged 37 percent to 2,775 won, but spinach fell 20 percent from its peak last week.

Meanwhile, lettuce and Chinese cabbage both climbed by a relatively conservative 5 percent. Previously, lettuce skyrocketed fivefold in the space of two months.

As rains interrupted fishing activities last week, prices of natural gizzard shad, which is now in season, continued to spike. The wholesale price of medium-quality gizzard shad shot up to 3,400 won per kilogram in Seoul yesterday, a rise of 377.8 percent from the previous day.

Other fish products directly damaged by the two typhoons, such as flatfish and soft shell clam, rose by 51.9 percent and 23.9 percent, respectively, to trade at 3,100 won and 4,150 won.

“Although the damage wrought by the typhoon was not as bad as expected, a serious setback in supplies of fresh vegetables and fish appears inevitable as the already high prices .?.?. will probably continue to climb,” an industry source said.