Harvard professor, 38, is a lesson in perseverance

Harvard professor, 38, is a lesson in perseverance 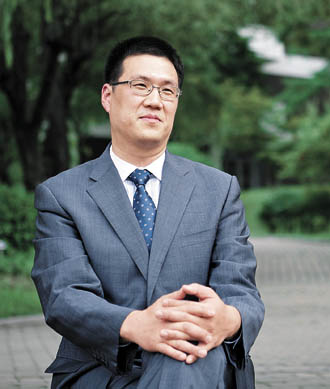 Ham Don-hee became a tenured professor at Harvard University at age 35 in 2009 and has been selected by students as “Harvard Yearbook Favorite Professor” for two consecutive years. Provided by Seoul National University

“I was able to accomplish what I achieved by working hard, but I also had luck,” Ham told the JoongAng Ilbo while visiting Postech in Korea this summer.

His class has become one of the must-take classes among students as demonstrated by the high marks given to him for lecture quality.

The Seoul National University alumnus has won the title “Harvard Yearbook Favorite Professor” for the past two years. Earlier this year, Ham appeared on stage to give his lecture for “Harvard Thinks Big,” touted as “one of Harvard’s latest and greatest traditions” by the Harvard Political Review (HPR).

The student-organized discussion is an annual event in which eight professors from Harvard University chosen by students share their “big ideas” with the community.

During the event, the 38-year-old professor talked about how unconventional ideas or notions, what he called “broken symmetry,” could produce profound and positive effects.

HPR, the official publication of the Harvard Institute of Politics, gave the lecture high praise, saying the Korean professor was “able to demonstrate how asymmetry also could be used to create an even more profound outcome.”

Ham cited the beauty of Marilyn Monroe by using her photograph to explain how her attractiveness was enhanced by a mole on one side of her face, which falls into the category of asymmetry.

Despite the top-quality classes he gives at one of the world’s most prestigious institutions of higher education, Ham confessed that he faced daunting difficulties in the early years of his studies in the United States.

“I couldn’t even understand what professors were saying during a lecture,” he said.

“I would not have imagined at the time that one day I would stand in front of Harvard students to teach with my lecture being positively reviewed. I guess working hard paid off.”

During the interview, Ham referred to one of his students, Yoon Ho-sang, a Korean who published a paper in the renowned weekly scientific journal Nature this month as the first author with Ham as the corresponding author.

“There have been many times when I learned from Yoon,” said the professor.

“I am blessed to work with highest quality of minds, like Ho-sang.”

Ham is working on the fusion of electrical engineering and bioengineering, as well as low-dimensional plasmonics.

“I have been studying ways to analyze specific proteins and cells using electrical interactions on a small electronic chip, to help demonstrate the possibility of diagnosing diseases like cancer at a low cost.”