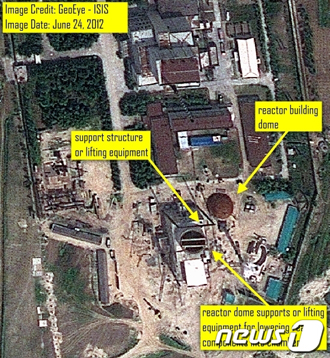 WASHINGTON - The UN nuclear watchdog said Thursday that North Korea has made “significant progress” in the construction of a new light-water reactor.

In a new report, the International Atomic Energy Agency said a dome has been placed on a reactor containment building in the secretive nation’s main nuclear complex in Yongbyon.

“There have been indications that some components may have been installed inside the building and a system for pumping water from the river to the light-water reactor for cooling purposes has also been built,” the agency said.

The IAEA’s assessment is in line with various previous reports, based on commercial satellite imagery, about the development of Pyongyang’s new uranium enrichment facilities.

“Deeply troubling” are the communist country’s statements about uranium enrichment activities and the construction of the reactor, added the IAEA.

But the agency said it has maintained its readiness to return to North Korea for a role in verifying its nuclear program.

Following a Feb. 29 agreement with the United States, Pyongyang invited an IAEA delegation to visit there to “discuss technical issues with regard to the monitoring of moratorium on uranium enrichment activities” in Yongbyon. At the end of March, the IAEA replied that it was willing to follow up North Korea’s invitation “in a constructive spirit.” Yonhap