Radio exec admits to getting $3.6M for DUP

Radio exec admits to getting $3.6M for DUP 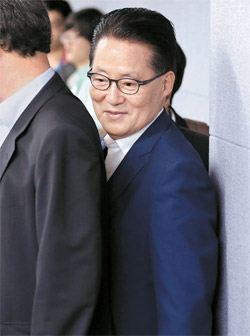 An executive of an Internet broadcasting company admitted to having received money from three aspiring lawmakers in February after promising to help them win nominations in the April legislative elections from the largest opposition party, the prosecution said.

Yang Gyeong-suk, a 51-year-old director of Radio 21, was detained earlier this week over the money-for-nominations scandal in the Democratic United Party.

The prosecution said she admitted during questioning that she received a total of 4.08 billion won ($3.6 million) from three men in return for using her connections to the party to win them nominations.

Lee Yang-ho, head of the Gangseo District Public Facilities Management Corporation, Jeong Il-su, a Busan-based businessman, and Lee Gyu-seob, head of an accounting firm, were also detained on charges of paying her. None of them won nominations.

The Central Investigation Unit of the Supreme Prosecutors’ Office also confirmed Thursday that Yang wired the money shortly before the April 11 legislative elections to about 30 bank accounts around the country.

The prosecution suspects that the money was given to politicians in the DUP to finance their campaigns. Yang was a loyalist of former President Roh Moo-hyun, and the prosecutors suspect she financed pro-Roh candidates.

The prosecution also found some traces of larger deposits made into the five bank accounts managed by Yang and began looking into the sources of the money. Several large deposits were made before the April 11 elections, the prosecutors said.

Frequent contacts between Yang and Representative Park Jie-won, floor leader of the DUP, were already discovered, and a DUP official in the party’s Daegu chapter was questioned as a witness because he introduced them to each other.

“Yang admitted that she had received money in return for nominations,” said Lee Du-sik, a senior prosecutor of the Supreme Prosecutors’ Office. “We don’t think she was committing a simple fraud.”

Until now, the DUP insisted that it has nothing to do with the scandal and the case was an isolated incidence of fraud by Yang. The largest opposition party also condemned the prosecution for carrying out a politically motivated probe in the sensitive months leading up to the December presidential election.

“Yang has long been a member of the pro-Roh faction,” said a DUP official. “If the prosecution’s probe shows that she delivered money to Roh loyalists, it would deal a fatal blow to the party.”

The DUP is currently having a presidential primary, and Moon Jae-in, former chief of staff in the Roh Blue House, is the front-runner in the race.

Others in the DUP, however, said the scandal could still be isolated around Yang. She was frequently involved in lawsuits, both criminal and civil cases, and the Seoul Western District Prosecutors’ Office is currently conducting a separate investigation into her on charges of a 1.3 billion won fraud.

“I was told that the Roh Blue House’s civil affairs office once investigated Yang,” a DUP lawmaker said, “because she bragged about her connection with the Blue House to sell advertisements for Radio 21.”

Meanwhile, the DUP floor leader, Park, again denied his involvement in the scandal. The JoongAng Ilbo reported Thursday that text messages from Park were found in the cell phones of Lee Yang-ho and Jeong Il-su, alleged nomination buyers. The messages were sent on March 19, the day before the DUP’s announcement of its proportional candidates, fueling suspicions of Park’s role in the scandal.