“I have to say that the recent spate of tensions between Japan and Korea have caused concerns,” the official told reporters on the condition of anonymity. 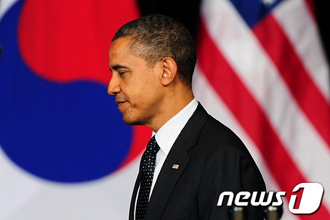 “We are, again, urging restraint, calm, and statesmanship in terms of dealing with these issues.”

Washington’s key Asian allies - Seoul and Tokyo - have been at loggerheads for weeks over Dokdo, a pair of largely uninhabited outcroppings in the East Sea. Dokdo is effectively controlled by Korea.

But Japan, which colonized Korea from 1910-45, claims them and is seeking to file a petition with the International Court of Justice.

Seoul says that its ownership of Dokdo, both legally and historically, is not disputable.

Tensions between the neighboring nations have soared, especially in the wake of Korean President Lee Myung-bak’s recent visit to Dokdo. Lee has also demanded that Japan offer a sincere apology for wartime atrocities. The Seoul-Tokyo standoffs have apparently taken a toll on Washington’s push for stronger trilateral cooperation.

The U.S. government normally maintains a wait-and-see attitude about tensions between the two sides. Yonhap