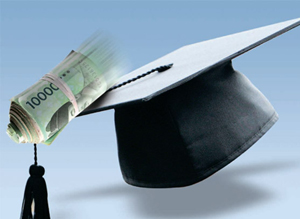 Financial support from the government will be halted next academic year for 43 private colleges - including universities such as Kookmin, Sejong and the Dongguk Gyeongju campus - citing poor school management.

The Ministry of Education, Science and Technology’s university structural reform committee, in an effort to weed out poorly managed colleges, announced the list of schools that will not be eligible for government financial support for one year after reviewing 346 universities nationwide. These included 197 four-year colleges and 139 junior colleges.

The education ministry also announced 13 schools that were extremely mismanaged that will face restrictions on receiving government student loans starting from the next academic year.

“The colleges designated this year are the lowest 30 percent in ranking colleges last year and were selected for their negligence to improve educational conditions,” said the chair of the committee, Lee Yeong-sun.

The committee further said that physical examination of the schools will be conducted between October and November.

It will encourage restricting of the schools, management training and merging of departments.

Some standards the committee reviewed while examining these colleges included student enrollment, employment rate of its graduates, how much the school supported students’ tuition and academic curriculum and professor management.

Those who ranked in the lowest 15 percent after judging the eight criteria for four-year colleges and nine for junior colleges were designated for the list.

In the case of Dongguk University’s Gyeongju campus and three other colleges, the administration fabricated post-graduate employment rates and they were listed this year regardless of how they scored in the review process.

In the case of these 43 schools selected, the government would stop providing some 2.5 trillion won ($2.2 billion) in support.

Last year, 43 schools were also selected including Sangmyung, Wonkwang and Kyungnam Universities for being poorly managed.

Sangmyung University expressed that it had a loss of 100 million won because of the lack of support from the government and the results of a tarnished image after being designated on the list last year, but with the support of students and professors managed to score better this year.

Of these schools, 13 schools appeared again on this year’s list. In the case of Pusan University and Youngnam Foreign Language College, they appeared for three consecutive years.

This is the fourth year that the committee has come up with a shortlist of mismanaged schools needing restructuring.

These measures came as a part of the structural reforms of the nation’s universities initiated by Minister of Education, Science and Technology Lee Ju-ho while the Lee Myung-bak administration winds down.

Some schools managed to escape from the list this year.

In the case of Wonkwang University in North Jeolla, the administration did a structural overhaul, abolishing six departments and increased its student enrollment by 10.3 percent.