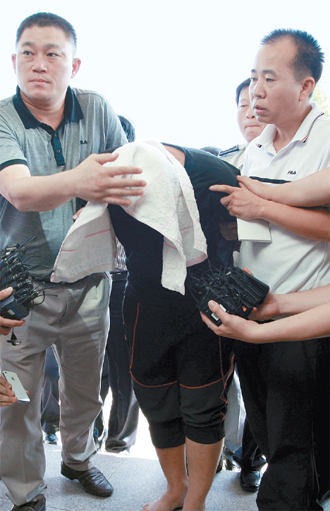 Police officers in Naju, South Jeolla, arrest a man suspected of kidnapping a sleeping 7-year-old girl from her home and brutally raping her, and take him to Naju Police Precinct yesterday for further investigation. [YONHAP]

A sleeping 7-year-old girl was abducted from her home in the early hours of Thursday morning and brutally raped in Naju, South Jeolla.

The suspect, Koh Jong-seok, is a 25-year-old neighbor of the victim and a friend of the victim’s mother, according to the police.

The suspect and the victim’s mother were playing computer games together at an Internet cafe shortly before the girl’s abduction, police said.

Koh was apprehended at a different Internet cafe in the nearby city of Suncheon at 1:20 p.m. yesterday.

He confessed to the rape during interrogation, police said, and said he was drunk and acted on an impulse. He had two prior convictions but no sex crime history.

According to the doctors who treated the abducted girl, her colon was ruptured and a five-centimeter (two-inch) tear was found in her genitals.

The 7-year-old girl was reported missing by her mother around 7:30 a.m. Thursday, according to police. The mother said the child had gone missing with a blanket while sleeping in the living room of the family’s house.

The police formed a search team and mobilized 160 troops to comb the neighborhood and downtown Naju. The search began at noon and the girl was found one hour later sleeping next to a road along the Yeongsan River, 130 meters (425 feet) from her home.

The victim was naked, wrapped in the blanket from her home, with signs of having been raped. She was rushed to a nearby hospital for emergency surgery.

“I was sleeping at home, but when I woke up, a stranger was holding me inside the blanket and walking,” the victim told the police. “I told him, ‘Please don’t kill me,’ and he said he was an uncle and it was okay.” 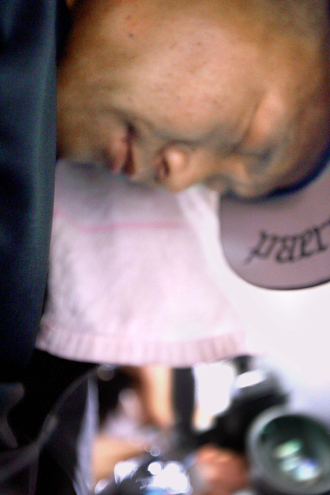 The suspect, Koh Jong-seok, a 25-year-old neighbor of the victim, was found in an Internet cafe in the nearby city of Suncheon at 1:20 p.m. yesterday. He confessed to the abduction and rape during interrogation, police said.By Oh Jong-chan

The police said the victim was severely traumatized mentally and physically and they only questioned her briefly.

According to the police, the suspect was an acquaintance of the victim’s mother and they used to play computer games together at an Internet cafe 70 meters away from the victim’s house.

Koh, a day laborer, lived 200 meters away from the victim’s family.

The victim’s mother and Koh were in the Internet cafe for several hours before the abduction. Koh left first, and the mother returned home at 2:30 a.m.

The victim’s house is located on the ground floor of a commercial building, and the living room can be accessed through a glass window.

The victim was sleeping in the living room with her older sister and brother and a younger sister while the father slept in another room.

The girl was home when the mother returned at 2:30 a.m. Thursday. A half hour later, the mother noticed that the child had disappeared, but she concluded she had gone into the room to sleep with her father, so she slept.

Around 7 a.m. Thursday, the father discovered that the child was missing and the mother made a report to the police 30 minutes later.

It was not clear yesterday where the rape took place.

The horrific nature of the abduction and rape were reminiscent of the brutal rape of an 8-year-old girl in December 2008, and the media have labeled it the “second Cho Du-sun case.”

In the 2008 case in Ansan, Gyeonggi, the victim lost 80 percent of her colon and genital organs as a result of the savage rape committed by Cho.

He was given a 12-year jail term. He argued that he was too drunk to control himself, and the excuse was accepted by the court, prompting a public outcry.

Yesterday morning, President Lee Myung-bak issued an apology to the nation for the government’s failed attempt to stop a recent spate of gruesome sex crimes.

During an unscheduled visit to the National Police Agency, Lee urged the police to improve their performance to protect the public.

“I can’t tell you how sorry I am before the nation and the victim’s family,” Lee said. “Beefing up public security will be the top priority of the government.

“Sex crimes and run-amok crimes happened on the streets, and now they have entered our homes,” Lee said. “The people are shaken. The government and the political parties are trying hard to resolve the problems.”

Admitting that there is a shortage of manpower and budget for the police, Lee said the government and political parties will cooperate to come up with a fundamental solution and asked the police to stay vigilant to protect the public.

The attack in Naju came only 10 days after a gruesome murder and attempted rape of a homemaker by a convicted sex offender wearing an electronic monitoring device.

Seo Jin-hwan was accused of killing the 37-year-old woman at her home in Junggok-dong, eastern Seoul, on Aug. 20.

“We need something stronger than the Blue House’s declaration of a war against sex crimes,” said Representative Lee Hahn-koo, floor leader of the Saenuri Party.

“The Blue House needs to present right now a measure so strong that there is no need for the next administration to modify it.”

The attack in Naju also took place as senior officials of the administration and the ruling party agreed to strengthen the punishment of sex offenders by expanding the use of chemical castration.

Prime Minister Kim Hwang-sik, Representative Lee and the presidential chief of staff, Ha Kum-loul, and other officials met on Thursday to discuss the recent series of violent sex crimes against women and children and the growing public insecurity from it. Currently only pedophiles are punished with chemical castration, but the ruling party wants to expand its use to all sex offenders.