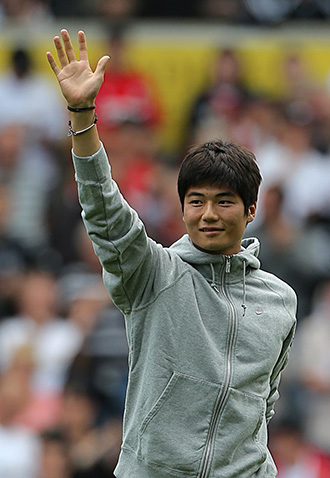 Korean midfielder Ki Sung-yueng made a brief debut in the English Premier League Saturday as his team Swansea City missed its chance to top the fledgling Premier League standings with a 2-2 draw at home versus Sunderland.

He had played 76 minutes in the team’s 3-1 Capital One Cup victory against Barnsley last Tuesday, three days after signing a three-year contract with the Wales-based club that paid a record high fee to bring him in from Scottish Premier League side Celtic.

Swansea opened its second season in the Premier League with two straight wins, but its impressive start to the season was checked by Sunderland and new signing Steven Fletcher at Liberty Stadium.

Having scored eight times without reply in two games, Michael Laudrup’s side conceded for the first time when Sunderland’s acquisition Fletcher netted twice late in the first half, either side of a fine Wayne Routledge goal.

Michu continued his rich seam of form with a 66th-minute equalizer but Swansea’s hopes of pressing for victory suffered a blow when Spanish central defender Jose Manuel Flores, known as Chico, was sent off 19 minutes from time.

Swansea confirmed later that left back Neil Taylor had suffered a fractured ankle during the first half.

Everton also lost their perfect record after goals from Shane Long and Gareth McAuley secured a 2-0 victory for West Bromwich Albion at The Hawthorns.

Chelsea, who are not in league action this weekend after playing in the UEFA Super Cup, have a maximum nine points, followed by Swansea and West Brom on seven.

Korean midfielder Park Ji-sung, captain of QPR, made the fourth straight full-time playing for the west London side in the match, which saw Bobby Zamora score for the Rangers.

The attention of many Korean football fans is now extending to Spain’s top league, La Liga, as another Korean football star, Park Chu-young, moved to Celta Vigo on Friday.

The Spanish club signed the 27-year-old forward on loan for the season from Arsenal. Park did not play during Celta Vigo’s first match against Osasuna on Saturday. Celta Vigo won 2-0.

At a fan meeting, Park told reporters that Spanish football has a technical upper hand compared to the English Premier League and said he believes he can be a good fit for the Spanish style.

“It will be a big opportunity for me,” Park said.