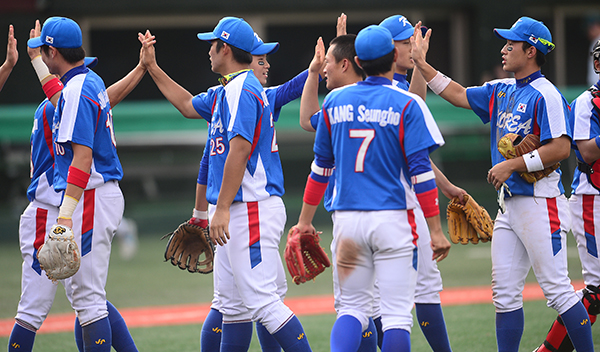 Korean players high-five after beating Australia 7-1 in its third Group A match of the U-18 World Youth Baseball Championship held at Mokdong Stadium in Seoul yesterday. Korea remains the group leader with three straight wins. [NEWSIS]


Jang Hyun-sik pitched seven solid innings on the mound for Korea yesterday, allowing just one run and five hits, as the unbeaten host routed Australia 7-1 and continued to cruise in their bid for a sixth title at the U-18 World Youth Baseball Championship. Korea remains atop Group A with its third straight win, following victories over the United States and Venezuela. Its next match will be at 6 p.m. today at Mokdong Stadium in Seoul, against Colombia, who suffered an 11-1 loss against the United States yesterday. The United States, which started with a 17-0 victory against the Netherlands, was tied for a second place with Venezuela, who defeated the Netherlands 8-3 in the other Group A match yesterday and previously beat Australia 6-3. At Mokdong yesterday, Korea got off to a shaky start against Australian starter Lewis Thorpe, who had signed a minor league contract with the Minnesota Twins in June. Australia got on the scoreboard first in the first inning. “I was shaken in the beginning, but batters helped and I regained confidence,” Jang told reporters after the match. Korea tied the game in the third and went on to maintain a lead from the fourth.Jang is set to make his professional debut next year. He signed with the NC Dinos, the Changwon-based ball club that will make a Korea Baseball Organization debut of its own next year in the now eight-club league. He pitched 116 balls with seven strikeouts.“I can get on the mound any time,” Jang said. “I want to contribute to Korea’s winning the event.” Korea has won the biennial event five times including in 2008. The championship was first held in 1981, with Korea taking the first title that year. Yoon Dae-young, who scored a three-run double against the United States, scored first against Australia in the third inning, bringing home Kim Min-joon from second base with a midrange shot. Song Jun-suk created another scoring chance in the fourth inning, reaching third on a stand-up triple, which Yoo Young-jun connected for a run on the following at-bat. Yoo came home, taking advantage of a defense error. Korea would then add two more runs in the eighth inning and another two in the ninth. “It is encouraging that the batting is back again,” said Korean manager Lee Jeong-hoon. Korea edged out Venezuela 2-1 on Friday, and then beat the U.S. 8-2 on Saturday. Lee also expressed satisfaction with his rotation and bullpen. Yoon Hyoung-bae, Korea’s ace, did not play for a second time after pitching against Venezuela. Yoon, the first overall pick at last week’s draft for the KBO, shut out the last three and two-thirds innings against Venezuela. The coach said he wanted to give the pitcher a sufficient amount rest before the upcoming games. A total of 12 countries are attending the event in Korea, which started on Friday, a day later than scheduled due to Thursday’s rain. Defending champion Taiwan is paired with Japan, Canada, Panama, the Czech Republic and Italy in Group B.After round-robin play, the top three countries from each group will advance to the second round. The teams’ combined records from the first and second rounds will determine the seeds for the ranked stage. The top two nations will compete for the championship. Canada retained the top position in Group B with two wins. It beat Japan 6-5 on Friday and bested Italy 4-3 on Saturday. Japan secured its first win, beating Taiwan 2-0 on Saturday. Taiwan won its first match Friday, 6-0 against Czech Republic. By Moon Gwang-lip [joe@joongang.co.kr]