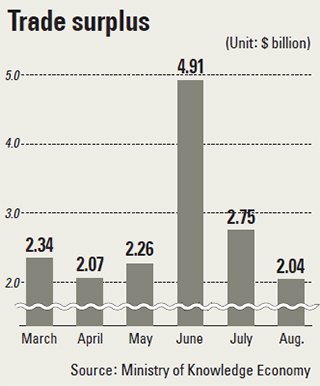 Korea managed to have a trade surplus last month but it shrank from that of July amid deepening woes in the global economy.

As exports continued to slow, imports reached the lowest level in 18 months.

With the nation’s economic force decelerating, the state-run research institute is showing signs of lowering its economic growth target from 3 percent.

According to the Ministry of Knowledge Economy, the nation’s trade surplus last month amounted to $2 billion, the seventh consecutive month Korea showed a surplus.

However, the surplus was less than the $2.75 billion posted in July and much lower than the $4.9 billion recorded in June.

With the Chuseok holiday around the corner, the trade surplus is likely to shrink more this month.

Additionally total trade for the first eight months of this year was $710 billion, down 0.9 percent compared to the same period last year.

The ministry cited as causes worsening trade conditions including slowing growth in China and the persistent crisis in Europe as well as a contracting local market. A typhoon and labor strikes also contributed to the downsized trade surplus.

Exports last month were the lowest since January when they were $41.2 billion. Last month’s outbound shipments were $42.9 billion, down 6 percent from a year ago.

Exports to many economies fell. While outbound shipments to the Middle East were up 8 percent on-year, exports to China were down 5.6 percent, the European Union fell 9.3 percent, Japan 9.6 percent and the U.S. 2.1 percent. Exports to South America nosedived 16.5 percent.

“It’s difficult to expect a sudden surge in exports since the global economy isn’t good,” said Lee Un-ho, director of trade policy at the Knowledge Ministry.

“The government plans on reinforcing all of our short-term strategies such as expanding trade insurance, trade exhibitions and marketing [to bolster exports].”

With economic indicators less and less cheerful, the state-run think tank Korea Development Institute (KDI) is likely to lower its economic growth target to below 3 percent.

It is unusual for the KDI to announce a revised projection in the middle of the year.

The institute announces its economic growth projection only twice a year.

The last time it made a change in the middle of the year was in 2009, not long after Korea was affected by the global crisis that started with the bankruptcy of Lehman Brothers. That year Korea’s economy grew a scant 0.3 percent.

After the euro zone crisis deepened, the Ministry of Strategy and Finance in June lowered its projection from 3.7 percent earlier in the year to 3.3 percent while the Bank of Korea a few days later presented a more conservative outlook by downshifting its outlook from 3.5 percent to 3 percent.

However, as the world economy shows no signs of improvement, pressures are building for a downward revision.

In the first three months, Korea’s had 0.9 percent on-quarter growth. Quarterly growth was sliced in half to 0.4 percent in the following quarter.

Even Finance Minister Bahk Jae-wan recently hinted that if the current gloomy situation continues it would be difficult for the Korean economy to meet its target by the end of the year and may instead see a 2 percent expansion.

The KDI in the first half estimated that the Korean economy would grow 3.6 percent.

“When we made that prediction in the first half it was based on the condition that the crisis in Spain would find a solution by summer,” said Lee Jae-jun, a KDI analyst.

“However, the situation at home and abroad has gotten worse.”

The analyst hinted that the outlook on next year’s growth would likely to be revised due to the ongoing crisis in the euro zone and U.S. fiscal woes as well.