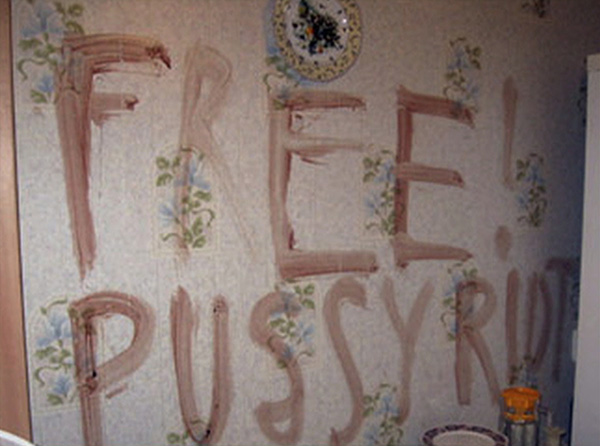 This image taken from TV footage provided shows where two women stabbed to death were found under this blood-written sign on the wall of their apartment in the central Russian city of Kazan. [AP/YONHAP]

MOSCOW- Two women were found stabbed to death in a Russian apartment with the words “Free Pussy Riot” written on the wall in what was probably blood, investigators said Thursday, stirring more passion over the women jailed for a protest in a church.

A lawyer for the women, who were sentenced to two years in prison this month for staging a “punk prayer” against Vladimir Putin in Moscow’s main cathedral, said nobody in the band or connected with it was involved in the crime.

Nikolai Polozov, said the words scrawled on the wall may have been a “provocation” aimed to discredit Pussy Riot.

The bodies of a 76-year-old pensioner and her 38-year-old daughter were found Wednesday in their apartment in the city of Kazan, the federal Investigative Committee said. They died of knife wounds.

“At the crime scene, on the wall of the apartment was discovered an inscription presumably written in blood: ‘Free Pussy Riot’,” said the committee, which is Russia’s top investigative body and answers to Putin.

Footage on state-run Rossiya television showed the words written in big red capital letters on the kitchen wall. There was no apparent connection between the victims and Pussy Riot.

Five members of the group burst into Moscow’s Christ the Saviour cathedral in February and performed a “punk prayer” asking the Virgin Mary to rid Russia of Putin, who was then campaigning for election as president after four years as prime minister.

The trial and sentencing of the activists drew sharp criticism.

The head of the church department for relations with the armed forces and law enforcement agencies, Dimitry Smirnov, suggested the crime might not have occurred if Pussy Riot had not received vocal support during their highly publicized trial.