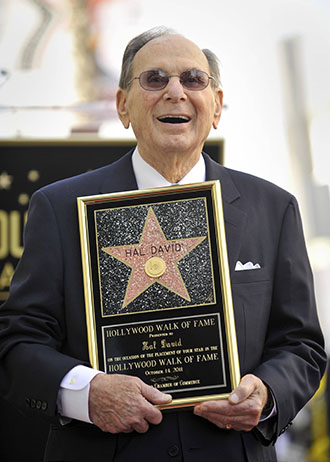 
LOS ANGELES - Hal David, a lyricist who along with composer Burt Bacharach took the pop world by storm in the 1960s with hits such as “Raindrops Keep Fallin’ on My Head” and “Walk on By,” died in Los Angeles on Saturday at age 91, a representative said.

David died at Cedars-Sinai Medical Center of complications from a stroke, said Jim Steinblatt, spokesman for the American Society of Composers, Authors and Publishers, or Ascap.

Earlier this year, David and Bacharach received the Gershwin Prize for Popular Song from the Library of Congress, during a White House musical tribute. David, a native of Brooklyn, New York, began his songwriting career in the late 1940s by collaborating with writers he had met at Manhattan’s famed Brill Building, which at the time was the center of the pop industry.

He started working with Bacharach in the late 1950s and their songs were recorded by such artists as Frank Sinatra, Marty Robbins, Tom Jones and Barbra Streisand.

The singer most associated with the songwriting duo is Dionne Warwick, who rose to fame by scoring a number of top-10 hits in the 1960s with material from David and Bacharach.

Bacharach and David’s song “Raindrops Keep Fallin’ on My Head” was written for the 1969 movie “Butch Cassidy and the Sundance Kid” and won the Academy Award for Best Song.

They also won a Grammy in 1969 for best score from an original cast show album for their Broadway musical “Promises, Promises,” which included the song “I’ll Never Fall in Love Again.” The play returned to Broadway in 2010 starring Kristin Chenoweth and Sean Hayes.

The songwriting duo’s other hits included “What the World Needs Now Is Love” and “I Say a Little Prayer.”