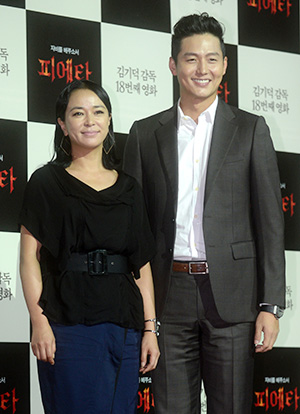 Jo Min-su and Lee Jung-jin, the stars of Kim Ki-duk’s new movie “Pieta,” will leave for Italy to attend the premier of the Korean film at the Venice Film Festival, according to the movie distributor NEW yesterday.

The two actors will attend a press conference for “Pieta” in Venice at 1 p.m. on Tuesday, Central European Time.

The movie - the 51-year-old French-educated Korean director’s 18th - is competing with 17 other films from all over the world in the Golden Lion Prize segment at the prestigious film festival, which kicked off Wednesday.

It is Kim’s fourth movie invited to the Venice festival.

“Pieta” is about an unexpected turn in the life of a cold-blooded debt collector, played by Lee, 34, who is surprised by the visit of a middle-aged woman, played by Jo, 47, who claims she is his mother.

It is the first Korean movie to compete in Venice since Park Chan-wook’s “Lady Vengeance” in 2005.