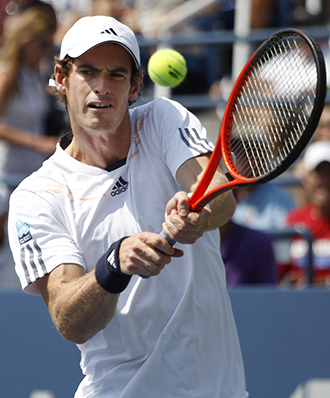 NEW YORK - Roger Federer and Andy Murray remained on course for a semifinal clash at the U.S. Open after they won in contrasting styles on Saturday.

“Could have gone either way,” Murray acknowledged. “It was very hot and humid in the middle part of the match. I was struggling a bit with that.”

The biggest moment came a few minutes before the fourth-set tiebreaker when Murray saved a break point in a 24-stroke rally in which he drew Lopez into the net, then pushed him back and finally got him to net a backhand to push the game to deuce.

“He came to the net, there was a drop shot, I made a good volley cross court. Points like that can change the match.”

The man he beat for the gold at the Olympics, and lost to in the Wimbledon finals, Federer, was barely bothered while dismissing No. 25 Fernando Verdasco 6-3, 6-4, 6-4.

Five of Federer’s record 17 Grand Slam titles came at Flushing Meadows, and he’s looking capable of adding to those numbers.

The Swiss did an unusual amount of damage at the net, closing out 26 of 27 points from the front court. Federer added that effort to the 32 points he won in 47 trips to the net two nights earlier in a second-round win over Bjorn Phau.

“I really tried to play offensive against .?.?. Phau in my second match,” Federer said. “I did lose more points than I was hoping to. But I think that gave me the confidence to move forward today. And conditions helped that because it was quicker during the day.”

Federer next will take on the winner of Saturday’s late match between No. 16 Gilles Simon and No. 23 Mardy Fish.

The previous time these two women played each other, it wasn’t close, either. The difference, surprisingly, was that Makarova won 6-2, 6-3 in the fourth round at the Australian Open.

That loss remains the only one for Williams in 22 Grand Slam matches against left-handers.

“Definitely was motivated; knowing that I lost [and that it] could definitely happen again. Did not want that to happen,” Williams said.

Williams has dropped only 12 games entering her fourth-round match against 82nd-round Andrea Hlavackova of Czech Republic. Hlavackova, the 2011 French Open doubles champion, bawled on court after her 5-7, 6-4, 6-4 win over 14th-seeded Maria Kirilenko.

The woman Williams beat in the Wimbledon final bout, second-seeded Agnieszka Radwanska, dealt with the stifling heat and former No. 1 Jelena Jankovic with equal aplomb during a 6-3, 7-5 victory.