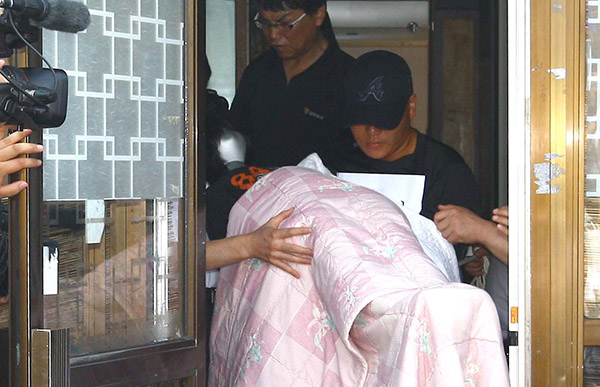 Suspect Koh Jong-seok, 23, in the black hat, re-enacts the kidnapping of the 7-year-old girl at her house in Naju, South Jeolla, on Saturday. An arrest warrant was issued for the suspect yesterday. By Oh Jong-chan

The Gwangju District Court issued an arrest warrant yesterday for Koh Jong-seok, the 23-year-old who confessed to kidnapping and raping a 7-year-old girl in Naju, South Jeolla.

“The court approved of the warrant because of the seriousness of the crime and a possibility of escape,” said Judge Jang Chan-soo in the ruling. 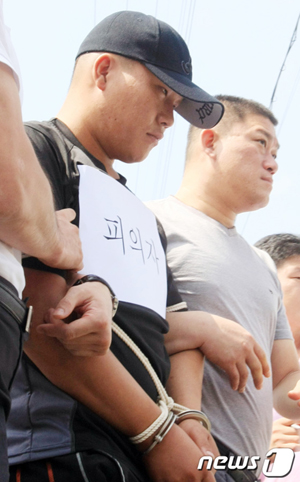 Koh was a neighbor of the victim who used to ask about the children and called the young girl’s mother and sister. The police investigation has revealed that while he has no prior convictions for sexual offenses, Koh did watch child pornography.

The brutal rape - the latest in a rattling series of sexual crimes in Korea - occurred on Thursday when Koh allegedly kidnapped the girl who was sleeping in the living room of her home and raped her by the Yeongsan River, 130 meters (425 feet) from her house. She was found naked and wrapped in a blanket with a ruptured colon.

According to the police, the suspect barely earns a living as a day laborer. Koh spends much of the money he earns at Internet cafes playing computer games. He usually sleeps at jjimjilbangs (public bathhouses) and motels, the report said.

Koh is from Wando County, North Jeolla. Neighbors in the village remembered him as a juvenile who frequently stole money and who was a fan of child pornography.

“He tried to steal donation money that students contributed to help flood victims,” said a resident surnamed Kim, who went to school with Koh. “He was notorious for stealing friends’ money. He also used to watch child pornography with the stolen money at Internet cafes.”

When the JoongAng Ilbo visited Koh’s house on Saturday afternoon, it was empty inside but the front yard was cluttered with trash including dead flower pots and soju bottles. Neighbors said Koh’s parents went to their daughter’s house in Naju as soon as the suspect was detained.

His grandmother, surnamed Choi, 84, was taking care of the house alone. She said she did not know what had happened to her grandson, but talked to the reporter about his childhood.

“He lost his biological mother at the age of 6,” she said. “He was emotionally damaged because he was neglected by the family after his mother’s death. He began stealing then.”

She said that his stepmother burned his pictures and clothes after the crime was reported.

Koh is also suspected of stealing 200,000 won in cash and three cartons of cigarettes from a supermarket right after raping the girl.