Korea reaches out to doctors abroad to boost industry

Korea reaches out to doctors abroad to boost industry 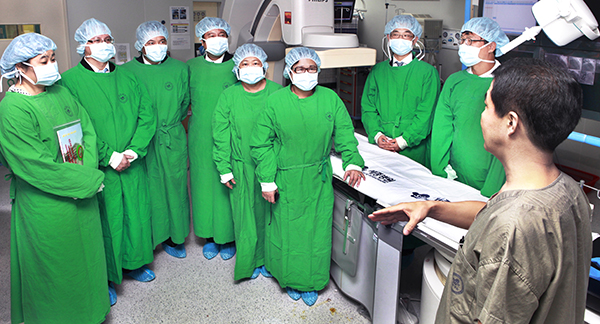 They peep through a window to see surgeons perform a heart reconstruction on a 1-year-old baby on a recent Tuesday afternoon.

They check out empty operating rooms, the rehabilitation center and patients’ rooms, peppering their guides with questions about procedures, equipment and health policies. They want to know about Korea’s national blood bank system and the hospital’s angiocardiography room.

“Because of the large number of Russian patients coming to Sejong General Hospital,” replies the nurse. “In addition,” she says, “there are several Russian doctors training in cardiology here.”

The four doctors and three representatives from the Ho Chi Minh City Department of Health were invited by the Korea Health Industry Development Institute, with the support of the Ministry of Health and Welfare, for a five-day visit to Korea Aug. 20-24.

It was part of Korea’s ambition to develop its medical sector through cooperation with medical industries in other countries. Khidi is a public health industry promotion organization established in 1999.

The doctors specializing in cardiology, ENT, pediatrics and oncology toured six medical facilities in Korea, including the National Cancer Institute in Ilsan, Hallym University Medical Center in Gyeonggi and the JK Plastic Surgery Center in Gangnam District, southern Seoul. They also attended a forum to discuss medical cooperation with some 50 doctors and representatives of Korean hospitals and clinics and held meetings with Korean Health Ministry officials.

“The familiarization tour for the Vietnamese was a stepping stone for medical cooperation between the two countries,” said Jung Ho-won, director of the division of global health care services in the Health Ministry. Last fall, he and other representatives of Khidi visited hospitals in Ho Chi Minh City to initiate talks to invite Ho Chi Minh health officials to come to Seoul.

“Korea is getting known worldwide for its K-pop, which is very popular in Vietnam, but we want to show that Korea is not just about Hallyu and show business,” said Jung. “We want to show how advanced we are in the medical sector.”

Khidi has several projects on medical cooperation in countries including China, the United Arab Emirates, Kazakhstan and Uzbekistan. In May, it signed an agreement with Kazakhstan to establish a Khidi branch in Almaty.

“The medical sector is an area which involves a lot of pride, so countries find it difficult to request help because to reveal any weakness in the health care system is like admitting to a weakness in their country’s infrastructure,” said Jung.

There are two types of health services that can be offered by Korea: inbound and outbound. The government and private sectors are actively promoting inbound medical tourism, or foreign patients coming to Korean hospitals for treatment.

But the Korean medical industry also is comprised of medical investment abroad and outbound services including building of hospitals and sending doctors to volunteer and teach. It also has foreign doctors training here in workshops, fellowship programs and seminars.

On the inbound side, the number of international patients seeking treatment in Korea, especially high-end procedures not available or affordable in their own countries, reached over 122,000 in 2011, more than a twofold increase since 2009, according to Khidi.

As an example, Sejong Hospital treated 580 foreign patients in the first eight months of this year, and its target is 1,100 for the entire year. The figure for last year was 650. “These are fly-in patients, not foreign patients residing here,” said Park Kyoung-seo, the hospital’s global affairs director.

But to attract more foreign patients, Korea has to make efforts to spread awareness of its health care prowess through investments overseas and programs inviting foreign doctors to visit facilities, attend medical conferences and train in hospitals.

The Samsung Medical Center said it has nearly 100 foreign doctors training this year, a quarter from Mongolia. Others are from Nigeria, Iran and Pakistan. Sejong Hospital has foreign doctors from countries such as Russia, Uzbekistan and Kazakhstan.

The National Cancer Center has short-term programs for visiting doctors, and this year, 10 nationalities visited its facilities, including Malaysians, Laotians and Kazakhs. It also offers three- or six-month visiting fellowship programs. This year, it hosted doctors from Indonesia, Nepal and India.

“Most of the doctors visit for three months because of visa limitations, and often receive recommendations after liaising with our Korean doctors at medical and academic conferences,” said Kim Sang-hoon, who manages the center’s fellowship program. “They come here to train in their specialties.”

In the case of Korea and Vietnam, the medical relationship is at the beginning stage. The Korea International Cooperation Agency (Koica) donated ultrasound machines to the Vietnam-Korea Friendship Clinic, Saint Paul Hospital in Hanoi in June, part of an ongoing project to provide medical equipment and doctors to the clinic, which was built seven years ago. Korea donated $1.3 million to upgrade the clinic, which provides medical care and free checkups in remote areas of Vietnam.

After five years of construction, the Quang Nam Central General Hospital in south-central Vietnam, supported by the Vietnamese Health Ministry and Koica, began operation in July. Korea contributed $35 million to build and equip the 500-bed hospital. The Hallym University Medical Center also sent some 40 doctors to provide expertise to the hospital in its opening phase.

As of March, 74 Korean medical institutions operate in 17 countries, the highest number in China, followed by the United States, Mongolia and Taiwan, according to Khidi. In comparison, there were five in 2001.

“We have to show our doctors’ abilities first in order for countries to learn about our medical capabilities.”

Visiting Seoul last month, Dr. Nguyen Huu Quoc Ngyuyen, director of Danang C Hospital, a general hospital established in 1976 and governed directly by Vietnam’s Health Ministry with a medical staff of 644, said his hospital is in the middle of completing an oncology center and was interested most in the National Cancer Center.

“Most doctors train in Vietnam at the moment, and we need a high level of training, so we would like cooperation with Korea to see if there can be more exchanges,” he said. “There are surgeries that Danang doctors do not have the ability to perform, and in those cases, we invite outside doctors to perform them.”

Vietnam, with a population of over 87 million, needs to expand its health care industry. The 101 hospitals in Ho Chi Minh have a surfeit of patients and are trying to expand.

Currently, there is one doctor for every 10,000 patients in the city, and the city’s health department said it had plans to increase the rate to 15 doctors to 10,000 citizens by 2015.

There are problems with the exchanges between Vietnam and Korea. The Vietnamese worry that their doctors are unable to actually perform surgeries while training in Korea and can only watch.

Korean doctors can practice in Vietnam after a review process which involves checking for experience and seeing if any medical crimes are on the doctor’s record. On the other hand, Korea does not allow doctors with foreign licenses to practice in Korea unless they pass a stringent review procedure, which is too troublesome when training is less than three months.

Furthermore, while doctors acknowledge Korea’s advancements in the medical field, there’s not much awareness amongst Vietnamese, who wonder why they would fly all the way to Korea for treatment when they can go somewhere closer.

“Countries such as Singapore and Thailand have been advertising medical tourism very well, and those countries are closer and their hospitals have been more efficient in marketing and promotion,” said Dr. Huynh Kim Phuong of Cho Ray Hospital, established in 1938 by France.

But there is still much to learn from Korea, Huynh admits. “In terms of the Asan Medical Center, we heard that the average time in the hospital is a little over four days, while in our country it’s seven days,” she said. With not enough beds for patients, it’s important to learn from Korea.