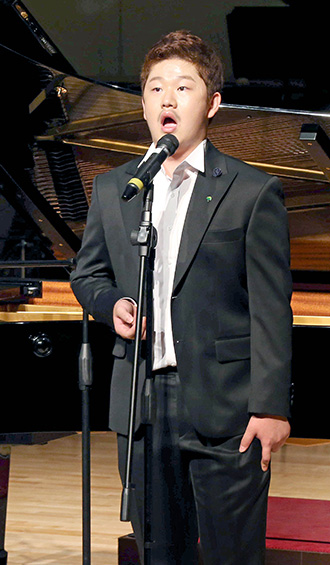 The curtains rise and 11-year-old Yu Ye-eun started playing the inspirational song “You Raise Me Up” on the piano yesterday at the Yongsan Art Center, central Seoul. Yu can’t see any notes; She is blind. She was joined by a 22-year-old man in a charcoal-gray suit with an equally challenging past, Choi Sung-bong. When the two wrap up their performance with a rendition of “My Way,” the 1,000-strong audience give them a standing ovation.

Choi became famous last year by coming in second in TvN’s singing-audition show “Korea’s Got Talent.” His operatic baritone and a moving rendition of “Nella Fantasia” put him ahead of all but one of his competitors. People started calling him the second Paul Potts, the operatic singer discovered on “Britain’s Got Talent.”

But it was his back story that really captivated the public, a life that read like something out of Korea’s grim past.

Now, Choi is becoming an inspirational figure, telling Koreans that if he can overcome his incredibly hard early times, they can get through their troubles, too.

He attends concerts like the one yesterday, which was promoted by ChildFund Korea. He is giving speeches across the country, including one at the Blue House. Choi recently released a book of essays titled “Don’t Give Up, You Only Get One Life.”

The vocalist, whose first appearance on “Korea’s Got Talent” ended up on YouTube and was watched 50 million times, doesn’t know his parents. He was abandoned at an orphanage in Seoul at the age of 3.

After a couple of years of being bullied, he ran away to make his way in the world - at age 5.

Choi got on a bus not knowing where he was headed, arriving in a red-light district in Daejeon, some 160 kilometers (100 miles) south of Seoul. The 5-year-old soon found the means to survive in a cluster of nightclubs, selling packs of gums, energy drinks and fake Viagra. For the next 10 years, Choi slept on night club staircases just before sunrise when the clubs closed, public restrooms or phone booths. Choi started drinking and smoking before he turned 10, did drugs and worked as a pickpocket. In an interview with the JoongAng Ilbo on Tuesday, Choi described those years as a “life worse than that of a cockroach.”

His first lucky break came when a woman who ran a street food cart recommended he attend a night school, where he learned to read and write at the age of 15.

A few years later, another big turning point came when Choi saw an ad online for vocal training in the Daejeon area. He tracked down the person who posted the ad and begged him for free lessons. Park Jung-so, then a college student studying music at Pai Chai University in Daejeon, tutored Choi and helped him get into the Daejeon Arts High School, which is known for producing talents.

A few years after he finished high school, Choi was doing construction work and decided to try out for “Korea’s Got Talent.” He won second place, missing the top position by only 0.2 percent of the votes.

He’s taking his new role of inspirational figure even more seriously than his singing career.

“If someone finds a glimpse of hope in my life story, that is the reason why I live,” said Choi. “I will go anywhere if someone needs me to give them hope.”