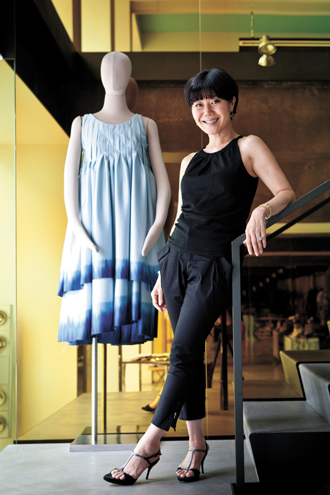 Those words bear testament to the essence of fashion in New York, where contrasting notions of old and young can not only coexist but thrive, in a city where even the most experimental clothes can be a fashion and commercial success. The city has become a mecca for designers seeking international attention, and the biggest showcase is the New York Fashion Week.

And Korean designers have been pursuing their share of the spotlight through Concept Korea, sponsored by the Ministry of Culture, Sports and Tourism, Korea Creative Content Agency, Korea Research Institute for Fashion Industry and Daegu Metropolitan Government. The program aims to help designers introduce their clothing at the claimed fashion week in an effective way.

The JoongAng Sunday sat down with the veteran designers Lie and Son to discuss Korean fashion and the New York show.

An unexpected dress showed up on the Red Carpet at the Cannes Film Festival this year. The dress is by Korean fashion designer Son Jung-wan.

Kelly Rutherford, best known in Korea for her role in the American teen drama, “Gossip Girl,” chose the 54-year-old designer’s creation for her moment in the spotlight. The actress said last September that Son’s New York collection was “very feminine and sexy,” and she went for a sequin dress from the Spring/Summer 2012 collection.

The selection by Rutherford was especially rewarding for Son, who broke into New York’s fashion world in 2011 because she wanted to be like “running river water rather than being stagnant.”

After building a strong customer base at home, this will be Son’s third New York show with “Concept Korea.” 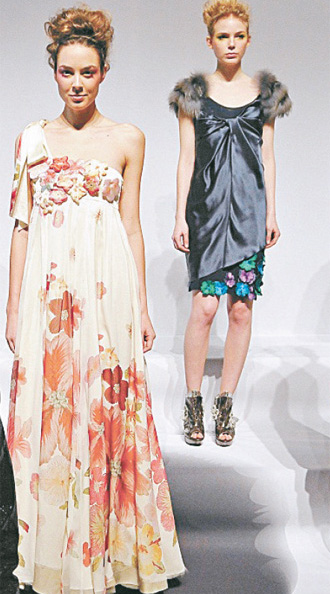 Q. Is a group fashion show necessary for you?

A. There is a synergy effect. Marketing campaigns and advertising promotions help make my name known to many people. I want to have more people recognize my brand and build a base for a commercial success by regularly attending “Concept Korea.”

It was quite a surprise when you announced your foreign debut. How did you make the decision?

I was very cautious about featuring my clothes abroad, even when I was invited to the Paris “Who’s Next” collection in 2006. After thinking long and hard, I decided to debut in New York. The strong sales and consumer base in Korea helped attract attention from buyers and the media.

You are known for your expressions of femininity. Do you try to emphasize a particular concept or atmosphere?

I always keep three notions in mind: feminine, sexy and luxurious. If all three are reflected in the clothes, I would call it a success. Being too feminine is boring and too sexy can be tacky.

What kind of clothes do you plan to display in New York?

My designs are inspired by Spanish artist Joan Miro. I tend to use motifs from the fine arts and Spain uses a logo inspired by the artist under the slogan “Everything Under the Sun” to promote tourism. Vivid yellow and red colors reminded me of a woman enjoying the breeze under the scorching sun.

You pursued a modern style. But “Concept Korea” may need to present clothes bearing something unique to Korea.

It is hard to add a modern touch to hanbok [Korean traditional costume], unlike the kimono. But it is something that should be done.

What does the New York collection mean to you?

I feel as if I compete in the Olympic Games. I have an athlete’s attitude.