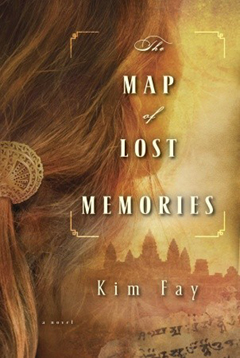 TOKYO - After being passed over for promotion in 1925, archeologist Irene Blum finds new purpose thanks to a mysterious map that promises a life-changing find and leads her on a quest to Shanghai and deep into the jungles of Cambodia.

Author Kim Fay’s debut novel, “The Map of Lost Memories,” follows Blum as she meets fellow adventurers seeking to be the first to discover a long-hidden temple and a set of ancient scrolls.

Fay, who spent four years living in Vietnam, said her passion for Asia was sparked by her grandfather’s tales of his adventures as a sailor there in the 1930s. She spoke with Reuters about her book and the challenges of writing about different cultures and time periods.


Q. What got this book going?

A. I had moved to Vietnam to teach English and give myself time to write. I knew I wanted to write a novel and I was working on a satire, a completely different novel. .?.?. I read “Silk Road,” which was a story of Andre and Clara Malraux. Andre was the minister of culture for Charles de Gaulle, but when he was in his early 20s, he and his wife “liberated” a bas relief from the temple of Banteay Srey. They came up with a whole plot. .?.?. They got as far as Phnom Penh before they were caught. That was the spark. There was something in that story I just started thinking about - the obsession. I think I was also still enamoured with that part of the world. The novel I’d been working on, which is not even worth remarking on, didn’t touch me in any way. I wanted to write about the place, mainly. It became one of those obsessions. I wanted to write about these people who were obsessed.

The settings are almost characters in their own right. How did you make them so vivid, given that they’re historical?

I was lucky. When I lived in Vietnam, I lived in Saigon, and [when] I moved there in 1995, it really hadn’t changed. All of the old French buildings were there. There were no skyscrapers. Granted, there were a lot of American buildings and things that had been built, but it truly was the old city.

But I also did things. For example, I knew Phnom Penh, but I got an old map from the ’20s. Then I went online and found every postcard I could from the ’20s and rebuilt the town in my house. So I actually rebuilt Phnom Penh in the 1920s, like a diorama, so my characters could walk through the different areas. In the jungle, I went up the Mekong River and got on a bicycle and went off by myself into the jungly bit.

What are the challenges of writing about different countries like this - especially in Asia it’s either stereotypes or too much exoticism. How did you handle this?

I struggled with that and had a really hard time. Take the tribespeople up in the jungle. Everything I wrote I found in books, and I found information and I talked to people. But the problem was the way that a Caucasian or a Westerner from the 1920s would look at those people, and how they would describe them and judge them. It would be very stereotypical and almost cartoonish. I’ve found travelogues from that time and thought “Oh my gosh, I can’t believe you just said that”.?.?. I pulled back from that, it’s something that’s on my mind all the time.