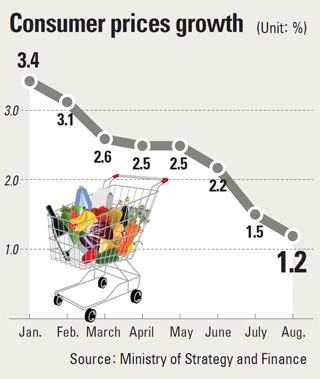 Consumer prices picked up slightly last month, sparking concern that they may be on the rise again after experiencing falls in June and July.

According to the Ministry of Strategy and Finance yesterday, prices increased 1.2 percent in August from a year earlier.

However, on a monthly basis, prices rose 0.4 percent, mainly due to a 4.6 percent spike in prices of fresh food, caused by an unprecedented heat wave, torrential rains and a recent series of typhoons.

A 4.4 percent increase in the overall price of agricultural products put upward pressure on general food prices amid growing concern of poor harvests resulting from droughts and unexpected changes in the climate in the last few months.

Fruit jumped 5.7 percent from a month earlier, while spinach and cucumber surged 64 percent and 33 percent, respectively.

Affected by Typhoons Bolaven and Tembin last week, food prices are expected to climb even higher this month. “The impact of the typhoons will be reflected in the figure for September, resulting in higher food prices,” said an official at Statistics Korea. “As the Chuseok [annual harvest] holiday arrives at the end of the month, consumers are likely to feel more of a burden from the higher prices.”

Finance Minister Bahk Jae-wan vowed to keep inflation in check at an economic meeting yesterday. “The government will continue to watch out for any economic risks at home and abroad, while putting in place measures to counter any rising food prices caused by a supply shortage resulting from recent typhoons,” Bahk said.

Core inflation, which excludes volatile agricultural and petroleum prices, stood at 1.3 percent in August, inching up 0.2 percent from the previous month.

The ministry said prices of petroleum products rose 1.8 percent last month from July. As the country depends heavily on energy imports, high oil prices have been cited as a main cause of inflationary pressure in the manufacturing sector.

“Although price growth could remain low for a while, there are numerous negative factors, including oil prices, that may cause inflation to spike again,” said the official at the statistics agency.

Despite the ministry’s moves to stabilize prices, consumers complain that prices of daily necessities are still rising.