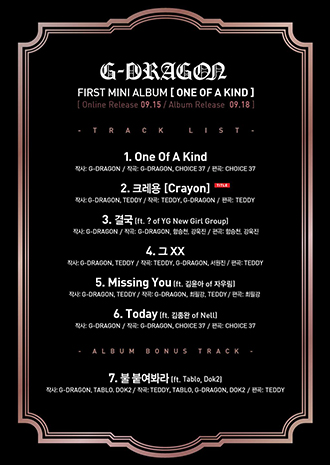 After much anticipation, Big Bang fans can now look forward to the day of G-Dragon’s album release, which falls on Sept. 15.

The album, titled “One Of A Kind,” is the artist’s first since the EP “Heartbreaker” back in 2009.

The title track of the album is “Crayon” which is a combination of the words “Crazy” and “Ji-young” (the singer’s real name).
The tune was co-written by YG Entertainment’s in-house producer Teddy.

The album boasts a stellar lineup of featured artists from Jaurim’s Kim Yu-na and Epik High’s Tablo among others.

The album contains seven tracks; music videos to the tracks “One Of A Kind” and “That XX” were made available ahead of time on Aug. 25 and Sept.1.