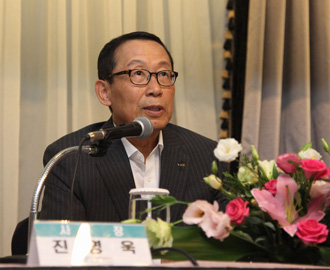 Korea Finance Corporation (KoFC) CEO Chin Young-wook said it may be difficult to proceed with the much anticipated initial public offering of the KDB Financial Group within this year, citing political disagreements.

In a press conference marking his first year in office yesterday, Chin said he was skeptical that the KDB Financial Group’s initial public offering would be completed under the Lee Myung-bak administration.

For an IPO to proceed, lawmakers must approve a government guarantee for KDB’s previously issued foreign currency-denominated bonds.

“The regular session of the National Assembly opened today, but due to political parties’ differing positions on the matter, proceeding with the IPO this year looks tough,” Chin said. “I assume a new administration may be able to push the KDB IPO next year but that also depends on political circumstances.”

The KoFC wanted to sell 10 percent of shares of KDB in November through an IPO in order to raise funds to support small and medium enterprises and help bolster the KDB’s global competitiveness.

According to a law passed in 2009, the government is required to sell some of its KDB shares by May 2014. The government currently holds a 9.74 percent stake in KDB, while the rest is owned by the KoFC. Both stakes will ultimately be sold.

“KDB Financial Group’s IPO is mandated by law, and we must make that happen,” Chin said. “Otherwise we’re not abiding by the law. ”

In regard to KoFC’s failure to auction off a controlling stake in aircraft maker Korea Aerospace Industries (KAI) last Friday due to a lack of competition, Chin said he will meet with shareholders of KAI again as early as this week to work out a future course of action, including whether to announce public bids again.

He didn’t give a time frame for when the second attempt will take place.

Korean Air submitted a letter of intent to buy the 41.75 stake in KAI on the Aug. 31 preliminary bidding deadline, but the bid became invalid when no one else bid. If a government-involved deal fails to find multiple bidders twice, it is allowed by law to seek a private contract, but Chin made clear that KoFC won’t pursue a private contract, saying that’s not transparent enough.